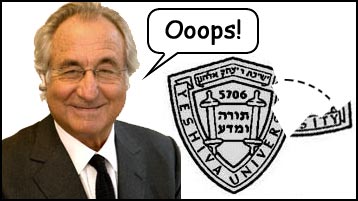 What a douche bag...

Citing financial pressures due to “millions of dollars in losses incurred in the debacle involving Bernard Madoff,” Yeshiva University President Richard Joel announced the layoffs of sixty YU staff people. These layoffs are part of cost cutting measures meant to trim about $30 million from the YU budget. This was not happy news for some as one disgruntled former employee who lost her job on Monday stated:

They affect the little people, the people that make the university run. The administration is the bread and butter of the university. Had all the senior staff taken a two percent cut it wouldn’t have been necessary to cut all these jobs for the people that aren’t making that much moneyâ€¦ Richard Joel makes half a million dollars a year. Why didn’t he take a pay cut?

Wall Street, “Greed, for lack of a better word, is NOT so good.” And you didn’t even have to go to a fancy Business School to learn that! Just ask 90 year old former retiree Ian Thiermann who had to abandon his retirement after losing his life savings of $750,000 to Madoff. Thiermann, who used to own a pest-control company in Los Angeles now works in a grocery store handing out fliers. Yup. That’s perspective for you.

Anyhow, you can see the full text of Yeshiva University President Richard Joel’s letter at the Jewish Star.

Hat Tip: Dani the lazy bastard who really should have written this post…