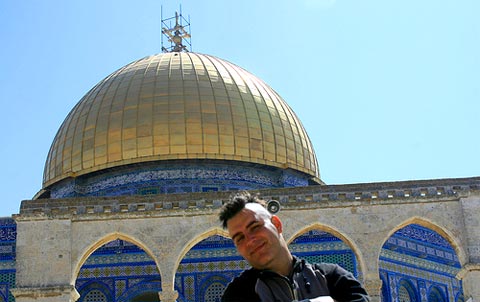 Mohawk on Har Ha Bayit: This image has nothing to do with this post. Sue me.

You guys can’t handle long thoughtful posts apparently. So here’s a snapshot of interesting stories, though unlike twitter, I will not restrict myself to 140 characters!

Thousands of Brazilians, Jews and non-Jews, demonstrated in Sao Paulo and Rio de Janeiro on Sunday against Ahmadinejad’s planned visit. Scheduled for Wednesday, it would have been his first stop in South America… In Sao Paulo, some 1,000 people – including secular and Orthodox Jews, as well as evangelical Christians, homosexuals and Gypsies – gathered in a major square to protest… In Rio, another 1,000 demonstrators walked along Ipanema beach carrying signs and shouting messages against terrorism, homophobia and racism.

2. A National High School Mock Trial competition has led to a real trial when an Orthodox School, Massachusetts state champs, were prevented from competing because of the organizers’ refusal to reschedule the Sabbath portion of the competition:

The students, whose school had never won a state championship in any activity, were crestfallen when told of the national scheduling problem. But they were also excited about their new role… â€œThe idea of a mock trial being in the middle of a real legal battle is pretty cool,â€ said Leah Sarna, 17… Her father, Jonathan D. Sarna, a well-known professor of Jewish history at Brandeis University, said the team was learning a legal lesson about â€œwhat it means to be a minority group.â€

If the Brookline kids don’t win, they can always dull their bitter disappointment, Cinco De Mayo style, with Kosher Tequila!

3. Jewish men and boys are disengaging from Reform Judaism:

It is a real phenomenon, affecting our rabbis, cantors, and educators; our teenage males. and the adult men of our community. While there are several complicated causes, one that cannot be denied is the fact that the temple culture in many locations is increasingly seen by many men as out of balance. By that, I mean it favors the needs and interests of women to such an extent that it can be perceived as ignoring men’s spiritual needs and interests.

4. Christians drilling for oil in Israel? It’s a matter of faith I guess…

â€œAs a Christian Zionist and New Covenant believer, I received the calling to render assistance to the Jewish people and the Nation of Israel and to aid them in the restoration of the land by providing the oil and gas necessary to maintain their political and economic independence,â€ Brown says.

Uhm. Thanks Christians, and good luck.

5. He’s from England. He’s an atheist. His Politics are Center Left. And he strongly supports Israel (!!). Why?

Despite the minus points however, Israel is in my view, a brave, vastly misunderstood and much hated (unwarranted) living and breathing embodiment of democracy and liberty fighting tyranny and religious despotism. It’s a nation that needs our support, our good will, our understanding and our help because if we refuse, we are in fact permitting large chunks of our own values and ideals of freedom be torn apart by Islamic absolutism. We in Europe, America and the rest of the democratic world are not idle spectators to this â€˜regional’ confrontation between Israel and groups like Hezbollah and Hamas, as it so often might seem; we are on the very same front line! From the Philippines to southern Russia and from the Parisian suburbs to Sudan and Nigeria there lies the same inherent danger that is facing us all, that of Islamic terrorism.

Read this well written and reasoned essay. It encompasses a blueprint for rapprochement with an important element of Western society that has, almost against all reason and logic, unnecessarily distanced itself from Israel.

“Mortar by mortar, shell by shell, only going to stop when I send them to hell,” the unidentified voice raps on the video, which runs at least 18 minutes… The video also shows a man reported to be Abu Mansoor al-Amriki, dubbed “The American” by al Qaeda. He apparently is now in Somalia training and counseling Somalis from North America and Europe. He speaks in American English… “Away from your family, away from our friends, away from ice, candy bars, all those things is because we’re waiting to meet the enemy,” says the man believed to be al-Amriki.

Read the article and see the video on CNN.

The Brooklyn district attorney’s office, which last month announced a hotline for alleged Orthodox sex abuse victims, says it has 19 active cases of alleged sex abuse in the borough’s Orthodox Jewish community. And advocates say the problem extends beyond Brooklyn… “If you’re a pedophile, just go to one of the orthodox communities. You’re probably safest there,” said New York State Assemblyman Dov Hikind, himself an Orthodox Jew. “It’s sad for me to say that, but it’s true.”

I don’t know if “stuggle” is the right word. Seems there’s still a lot of denial and obfuscation. Seems to me that the powers that be in these communities need to understand that the truth will always come out and that it’s MUCH less of a Chillul Hashem to openly deal with allegations of sexual abuse then it is to hide them.

Amy Winehouse turns her black, bewildered eyes towards the cameras and we too are bewildered. Why does she seem to want to kill herself with drugs? Is the source of her pain the source of her genius? We seem to have been asking these questions for years, as she disintegrates yet further, live on Sky News… But a superb new book has just come out that provides clues. Lilian Pizzichini has written a portrait of Jean Rhys – the patron saint of alcoholic writers. Her life was an opera of violence and self-destruction. She was helpless; she wanted to destroy herself and she did, and between the blackouts and the chaos, the occasional novel leaked out.

Sarah Silverman’s plug for “The Great Schlep” — the effort to get young Jews down to Florida so that they could convice their grandparents to vote for Barack Obama — won the Webby Award for best political video. Silverman also won the best actress award — for this not-for-the-children video about her fictitious affair with actor Matt Damon.

10. The Greatest Jewish Resurrection Since Jesus Christ? Winona Ryder set to make a big come back:

Dazzling, rebellious and iconoclastic, she was the elfin beauty in the 1980s bratpack before her conviction for shoplifting and spectacular fall from grace. Now the star of Heathers and The Age of Innocence is returning with a batch of summer movies…

11. I sense the apocalypse approaching – The JTA releases its list of the 100 Most Influential Jewish Twitterers. Much controversy ensues – Google it if you care. Against all reason or logic, I was ranked number 2. Good lord. Geez you guys – my entire presence on twitter is an elaborate joke!