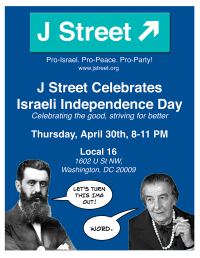 What would Theo and Golda think of J Street's approach to middle east peace, the future of Israel, and American Israel relations?

I subscribe to many email lists of organizations that I don’t agree with. I like to see what people are sending out to their folks, how they portray themselves to their supporters versus how they portray themselves to the world. I like to see what they really think about themselves, and by getting their stuff, you get a picture over time of their ideas and agenda. So here is a little exploration of a recent J Street email to supporters that states their aims and objectives, and most importantly, their sense of arrogance. From our Jewish brothers and sisters over at J Street:

Do Jewish Americans and other friends of Israel support President Obama’s active and balanced pursuit of Middle East peace?

We have to prove that the answer to this question is yes — right now.

Defenders of the unworkable status quo [who likes the status quo?] are whispering to the White House and Congress that supporting the President’s thoughtful and balanced [blame the victim is now fair and balanced?] approach to the Middle East could hurt them politically.

We know that the majority of Jewish Americans – and of Americans generally – support the President’s balanced calls on Israel to freeze settlements, for the Palestinians to rein in violence and incitement, and for Arab states to take steps toward normalizing relations with Israel. [Which they have all completely rejected in today’s papers.]

Each line can be discected, and the entire letter is below the fold. Buzz words that caught my eye include “whispered” implying a Jewish cabal. “Hurt them politically” which is the SOP of Israel Lobby conspiracists. The letter ends with “All of our futures are at stake…” really? “Our” future is at stake? Or theirs?

J Street is running hot and full of themselves after the Jewish summit with Obama, when their approach was the one favored by the Obama administration. I am reminded of the phrase from Pirkei Avot: Be careful in your relations with the government; for they draw no one close to themselves except for their own interests. They appear as friends when it is to their advantage, but they do not stand by someone in their time of stress.

When J Street’s approach fails to bring good polling numbers to the Obama camp, I am guessing that they will no longer have the ear of the inner circle.

J Street believes that American pressure is the answer! This will somehow convince Hizbollah and Hamas to give up their stated aim of destroying Israel, bring a democratic government to run a Palestinian state, get all the Arab states of the region to join in one big love hug with Israel, get Yesha to forget the Torah, and even make the lion lie with the lamb.

J Street has forgotten their Torah/Bible studies. Jews are a stiff necked people, and we don’t like people telling us what to do. Even God can’t tell us. And Israelis have an extra dose of stiff neckedness. American pressure has already hardened most Israelis and as we mentioned only 6% of Israelis back Obama’s policies. The current policies are likely to continue intransigence. As soon as the Obama folks have had enough of no results on the middle east, J Street’s star will no longer shine over the White House. There are millions of pro-Israel Christians whose support Obama needs much more.

I mean no ill will towards our brothers and sisters at J Street, I am not calling them names. I just think that their approach will get us nowhere fast.

Do Jewish Americans and other friends of Israel support President Obama’s active and balanced pursuit of Middle East peace?

We have to prove that the answer to this question is yes — right now.

Defenders of the unworkable status quo are whispering to the White House and Congress that supporting the President’s thoughtful and balanced approach to the Middle East could hurt them politically. [1]

And they’re supporting a sign-on letter in the Senate, authored by Senators Bayh (D-IN) and Risch (R-ID), that directly undercuts the President’s policy, asking that President Obama press only Arab states. [2] The letter doesn’t even mention the need for Israel to stop building settlements or for Palestinians to end incitement to violence against Israel!

We know that the majority of Jewish Americans – and of Americans generally – support the President’s balanced calls on Israel to freeze settlements, for the Palestinians to rein in violence and incitement, and for Arab states to take steps toward normalizing relations with Israel.

Click here to urge your Senator to support changes to this one-sided letter so it reflects the President’s balanced approach and specifically mentions his call for a complete Israeli settlement freeze.

The President’s approach is our best hope of breaking the dead-end status quo in the Middle East and securing Israel’s future as a democratic home for the Jewish people. Without strong American leadership to achieve a two-state solution and a regional comprehensive resolution to the Arab-Israeli conflict, the window for a two-state solution will likely soon slam shut.

Fifteen months ago, we launched J Street to advocate for such leadership.

Today, with over 100,000 supporters and growing, we find ourselves at a moment of truth. An American President who inspires us with hope and vision is pursuing the path that is most likely to bring peace and security to Israel and the Middle East.

Your actions will help us turn decades of conventional wisdom regarding American politics and Israel on its head. We’ll prove that the majority of Jewish Americans – and of Americans generally – will support the U.S. pushing all sides to make the hard compromises necessary to end decades of conflict and violence.

Start by clicking here to tell your Senators that you support President Obama’s balanced leadership for peace and that Senators Bayh and Risch must amend their letter before they sign on.

During our “August Action Challenge,” we’ll offer you many more ways to make your voice heard: emailing the President, calling your Member of Congress, writing to your Senators, helping us run newspaper ads, writing letters to the editor, spreading the word about our efforts, and more. We’ll keep a running total of the specific actions taken and report to you, the media and the political leaders who need to hear from us on your actions.

By the end of the month, we’ll have demonstrated the deep well of support from friends of Israel for the President’s leadership in achieving a two-state solution now, for ending the stalemate of the past two decades – and for the difficult steps we’re asking Israel and its neighbors to take.

Start today by emailing your Senators to show your support for the President when it comes to Israel and the Middle East.

Then, forward this message to five of your friends to tell them now is the moment to stand up for a brave President taking a gutsy and thoughtful approach on this most difficult of issues.

All of our futures are at stake.