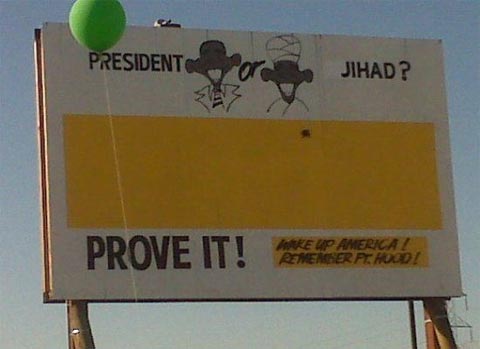 Spotted in Wheat Ridge, Colorado: The billboard above, insinuating that President Obama is in some way tied to Jihadists and the Fort Hood shootings. The manager of Wolf Interstate Leasing defended the billboard displayed on their premises by claiming that the words “We are a christian nation” appear in the constitution. 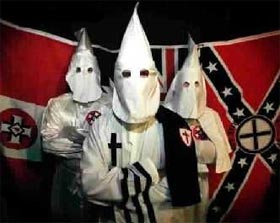 So yeah. Keep in mind then that if you believe any of those batshit Obama conspiracy theories, this is who your ideological partners are. Nice. Speaking of batshit, down in Oxford, Mississipi, the local Klansmen are not so happy. They marched today in protest of the University of Mississipi’s decision to eliminate the song “From Dixie with Love” from the school’s band lineup. Performed before at home football games, fans would respond to the song by chanting “The South will Rise Again!” In defense of the students at Ole Miss, when the Klan rallied, they were confronted by an angry crowd of students that sent the Mississippi White Knights of the Ku Klux Klan packing after 15 minutes. But still. Someone was chanting that shit at football games.