A Bracha For Tarantino 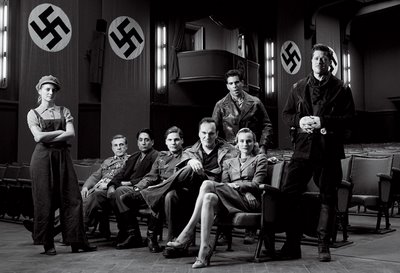 On the set of Basterds, the cast with filmmaker Tarantino

I gave Quentin Tarantino a blessing. Let me explain.

I had never gone to see a Tarantino film. I had only seen clips. But I couldn’t pass up a chance to see Inglourious Basterds at a private screening organized by The Jewish Journal, the Board of Rabbis, and the Israeli Consulate, followed by Q&A with Producer Lawrence Bender and Actor Christoph Waltz.

A good crowd showed up at The Landmark. I bought a large drink I didn’t manage to finish. We started almost a half an hour late â€“ some important folks were stuck in traffic. How Jewish is that, that they started late for some folks? The lights dimmed. Action.

Basterds is brilliant from every angle. It has drama, humor, romance, and suspense. The plot twists are compelling. The story, the photography, the script, the acting, and the drama all are detailed, textured, nuanced, colorful, and captivating.

I must admit I was a little apprehensive. I had no idea what to expect — except I heard a lot of violence. While Inglourious Basterds has some pretty graphic violence, it is a WWII movie after all. The scalping made everyone cringe.

So why the special screening to a bunch of Jews in LA, and a whole lot of Rabbis? The people who made and distributed the move, The Weinstein Company, Lawrence Bender, and Tarantino, feel the movie has Oscar potential. Christoph Waltz received Best Actor at Cannes for his portrayal of the Nazi Jew Hunter. But the film was perhaps not widely known in the community, or the filmmakers wanted to give the film some good PR in the Jewish community, whose opinion on the movie counts for the filmmakers in the run up to Oscar season. Perhaps they felt the film needs a rabbinic seal of approval.

This is a film about WWII, revenge, and the “face of Jewish revenge” portrayed by a band of American Jews scalping Nazi behind enemy lines. Then there is the massive revenge brought on the entire Nazi leadership by a Jewish woman whose family was murdered. The Jews are tough in this film. No sheep to the slaughter. The Nazis are brutal, interesting, grotesque. The leader of the Basterds played by Brad Pitt brands Nazis with Swastikas on their foreheads so they cannot escape into regular life afterward. They cannot escape what they have done.

Tarantino did a ton of research on his subject matter and it shows. He read up on the Nazi film industry, and the war, and real life WWII spy stuff. He digested all the previously exulted WWII movies.

There are too many great moments in the film for a blog piece, but I loved this line uttered by Winston Churchill when hearing of the Germans plans to replace Jewish cinema with Nazi cinema.

â€œYou say [Goebbels] wants to take on the Jews at their own game?â€

This film has so many layers.

After the screening, Lawrence Bender the producer and Christof Waltz the main actor answered questions from Rob Eshman. Then the floor was opened to questions.

Christof Waltz, the lead, is a seriously talented European actor based in Berlin. Rather than seek the cover of Us or People, he would rather have deeply philosophical discussions. Acting, art, theater, is an intellectual and serious pursuit. You just don’t get that feeling from most American actors today.

Waltz told the audience the film is about how we perceive reality, it’s not a Holocaust film [I agree]. People attribute films with much too much importance today, he feels. People are so concerned in the audience, what might other people think about the portrayal of this or that, how might Iran use this as propaganda against Israel and the Jews â€“ but how do we personally feel about the film? How do we react?

A woman began a long question about Tarantino films in general, and then this film asking whether people might mistake Basterds for real life events, when they aren’t.

Then from the back of the small theater we hear:

And from then on the evening became exciting. Tarantino fielded a few questions and interjected when he felt like it. And he didn’t run away after the show. Two hours after the movie ended he was there in the hallway still speaking with adoring fans and attendees about the film.

â€œWhat if people are confused about what is truth or fantasy?â€

The film starts off with the line, “Once upon a time in occupied France.” Tarantino replies. â€œIt’s a fairy tale, its based on real people and events. But if people don’t get it, toughâ€¦.â€

I was introduced to Tarantino late in the evening as a Rabbi who had never seen his films. He was gracious, down to earth, appreciative of my compliments that I loved the film, and now understand why everyone is so crazy about his work.

And as is so often the case, I really had no prepared script, and I had handed out all my Jewlicious Festival cards to the Producers, the actors, the organizers. Before I realized it, I had switched into Rabbi At Joyous Event Mode.

I gave Tarantino a bracha, a blessing for continued and even greater success in life and in film making.