It’s Not Over Til the Fat Cantor Sings 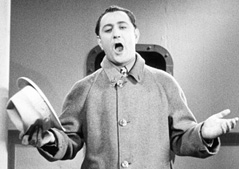 And the Voice Was Not Consumed

Contrary to rumors swirling around the Upper West Side of Manhattan and other Jewish ghettos, The Jewish Theological Seminary of America is NOT closing its cantorial studies program or merging it with the Reform movement’s program at Hebrew Union College. But just when I was planning to quit my day job and enroll in cantorial school, JTS has decided to reorganize it rabbinical and cantorial programs of study and it will eliminate the position of Dean for the five year program at its H.L. Miller Cantorial School. The school currently has about three dozen students with a variety of vocal ranges. JTS has reportedly been undergoing evaluations of its programs and missions for over a year, and more changes are expected. Since cantors are no longer divas who just sing prayers; and they take on greater roles in the community and synagogue life, perhaps JTS is thinking of merging the roles of rabbi and cantor, thus creating a “rantor?” (sort of like a cranberry raisin, or a CRaisin)