Kotel to no longer appear in British tourism ads

Just one complaint was enough for Britain’s Advertising Standard Agency to decide that the kotel should no longer be part of Israel tourism advertisements circulated in the United Kingdom.

The contentious ad shows a photograph of the Western Wall with the Dome of the Rock in background, alongside a photo of Tel Aviv-Yafo, as part of a “Day 3” in Israel suggested itinerary fromÂ ThinkIsrael.com (Israel’s Ministry of Tourism). The Kvetcher notes that the person responsible for this ruling is a Persian Muslim. Nice. 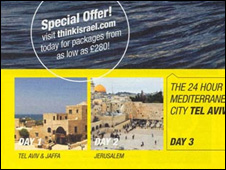 “The status of the occupied territory of the West Bank was the subject of much international dispute, and because we considered that the ad implied that the part of east Jerusalem featured in the image was part of the State of Israel, we concluded that the ad was likely to mislead,â€ the ruling reads, as reported in The Jerusalem Post, London’sÂ The Jewish Chronicle and other news sources.

Jerusalem’s mayor, Nir Barkat, is irate, calling the Western Wall “the heart and soul of the Jewish people and the State of Israel” determining that the ASA has made a “shameful accusation showing a complete ignorance of history,” according to a Reuters report. The Israeli Tourism Ministry, he continues, will continue to run ads showing images of the Kotel.

I couldn’t agree more with Barkat (not that my humble opinion has any significance), and it is absolutely absurd to suggest that the Kotel is not part of Israeli soil. The last time I checked, it was the Israeli government controlling entrance and exit to the holy grounds and an Israeli flag waving proudly over the heads of visitors in prayer here. The Western Wall is perhaps the holiest site of the Jewish people — especially while Judaism’s truly holiest site, the Temple Mount, continues to be under the stringent management of the Muslim Waqf.

Meanwhile, my Jewish friends in England inform me that in today’s Jewish Telegraph letters page, an Israeli woman notes that the day following the UK’s decision to ban the kotel ad, the enormous cloud generated from the Icelandic volcanic eruption grounded all non-emergency flights into and out of Britain. Perhaps the hand of God, the writer suggests? An eleventh plague?