The Little Jewish Boy And The Soldier Reunited 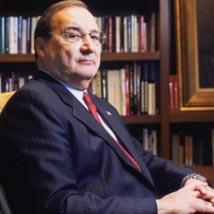 This is a very moving story from The Detroit News about Abe Foxman and Rabbi Goldman We had the pleasure of spending Shabbos with Rabbi Goldman in 1997.

In the fall of 1945, a Soviet soldier hoisted a 5-year-old boy aloft and paraded him through a Lithuanian synagogue that had been closed throughout a long Nazi occupation.

For 65 years, the boy and the soldier carried that moment in their heads and hearts. Unknown to each other, they told the story to family and friends. A Toronto songwriter memorialized it in song. The boy became a man and included the anecdote in his 2003 book.

On Thursday, they met and embraced for the first time since then in Rabbi Leo Goldman’s Oak Park living room.

“It was very emotional, much more than I would have expected,” says the former small boy. He is Abraham Foxman, the New York-based director of the Anti-Defamation League. In that role, he is a public voice against racial and religious intolerance.

The soldier is Goldman, 91, an Orthodox rabbi in Oak Park and an educator who continued to work as a Beaumont Hospital chaplain until a few months ago.

“We tell this story every year,” says Rose Brystowski, the rabbi’s daughter, who says her father has become too frail to interview. “It’s very moving to us, because it’s about survival, about a child symbolizing the future of our people.”

The memory remains vivid for Foxman: He had lived with his Catholic nanny, separated from his parents and concealed from the Nazis as a so-called “hidden child” for four years.

The nanny saved his life — but also taught him to spit on the ground when a Jew walked by.

In mid-1945, he was reunited with his parents. His father waited four months to take him to a synagogue on the holiday of Simchat Torah, an ancient and festive holiday that celebrates the reading of the Torah — the Old Testament — on hand-written scrolls. “That was very smart of him because it is a fun holiday for children,” says Foxman, who remembers walking by a church and making the sign of the cross entering the synagogue for the first time.

For Goldman, who had been wounded twice as a soldier, and lost his parents to the Nazis, the return to the synagogue in Vilna that day was also momentous. The concentration camps had been liberated, Jews were reuniting with their families across Europe, and in Lithuania, it was no longer a capital crime to be Jewish. Most had been dispersed or exterminated. Only 3,000 of Vilna’s 100,000 Jews remained.

“Are you Jewish?” the Soviet soldier, asked the boy. When he nodded yes, Goldman said, “I have traveled thousands of miles without seeing a Jewish child.” Then he stooped down, lifted the boy and danced around the room with him.

Neither man ever forgot that day, that celebration of religion and survival under extraordinary circumstance.

But only last summer, after an Israeli researcher finally put together a song, “The Man From Vilna,” about the incident with a Michigan rabbi, did Foxman learn that the Jewish Soviet soldier he wrote about in his 2003 book, “Never Again?” was Goldman, still alive and living in the United States. The songwriter had credited Goldman as the story’s source.

Getting to Thursday’s reunion was circuitous: Three years ago, Foxman told the story at Yad Vashem, the Israel Holocaust Memorial Museum. There, a researcher embarked on a quest for the dancing man in uniform Foxman described: Eventually, she found the song, inspired by Goldman’s story, and the rabbi’s name in the credits. For Foxman, that day “was a memory, a bittersweet memory.” The soldier — a stranger — had embraced him in public, in a synagogue. He had carried him like a trophy around the synagogue.

“That was for me the first time anyone took pride in me,” says Foxman, who as “a hidden child didn’t know who or what I was.”

For both men, the memory was frozen in time, unattached to any living person.

“I thought that story was a kind of legend,” recalls Brystowski. “I always believed it in my heart, but on another level, I wondered, did that really happen?”

She was stunned when she learned last summer, when Foxman called, that “this prominent, grown man” was the little boy she had grown up hearing about.

The mythic boy had become a very real and prominent man. “It shows us that any gesture, any mitzvah or good deed, can have an impact,” she says.

On Thursday, the two men hugged and talked and recited a Hebrew prayer, a blessing that’s a reminder of the importance of celebrating life in the moment.

“It is a privilege to have lived long enough to have this moment,” Foxman says Goldman told him.

Goldman’s parents and older brother were killed by the Nazis. Foxman’s early years as a “hidden child,” living with secrets and lies, led him into a career of speaking out publicly against injustice and hatred.

For each man, the memory of dancing in a Vilna synagogue was a pivotal moment. “I came home and told my father that I wanted to be Jewish,” recalls Foxman. “It was the beginning of my life as a Jewish person.”

Each man had a memory of a moment — a dance in a synagogue — that symbolized then and throughout their lives the promise of freedom and faith and life.

At long last, the boy and the soldier who carried phantom memories, now know each other as two grown men who have, against the odds, survived to find each other.

From The Detroit News: