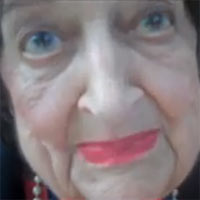 Helen Thomas has lost her marbles.

Helen Thomas was born in Winchester, Kentucky. Her parents, Mary (nÃ©e Rowady) and George Thomas, were Lebanese immigrants from Tripoli, Lebanon.[2][3][4] She was brought up in Detroit, Michigan, and attended Wayne University (now Wayne State University), graduating with a bachelor’s degree in 1942.

Has her advanced age led her to this or was she always like this and was able to keep herself in check?

UPDATE: An apology was posted on Thomas’s Web site: â€œI deeply regret my comments I made last week regarding the Israelis and the Palestinians. They do not reflect my heart-felt belief that peace will come to the Middle East only when all parties recognize the need for mutual respect and tolerance. May that day come soon.â€