Team USA: The Jews Of The World Cup 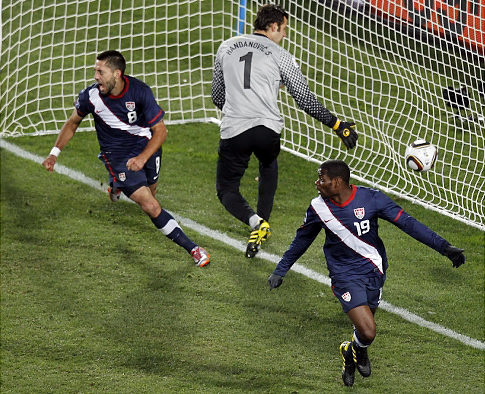 For the record â€” and the game is still going onâ€” Team USA has had their second disallowed goal disallowed of the World Cup. Early in the game, Team USA had the Algerian defence in dissaray, and several USA players in the box. The USA striker could have made a shot and saw his teammate in front of the open goal a few feet away. He passes laterally, and the stricker sticks in hard into the back of the net. Whistle.

It is De Va Jew all over again. The ref calls off the goal, ostensible for offsides this time. But every commentator and the replay clearly show that yet again, USA was robbed of a legitimate goal.

Maybe it is because there are more Jews on Team USA than ever before? At least three Jewish players make the USA team far and away the most Jewish team in the tournament, “Jonathan Bornstein and Benny Feilhaber, both 25, along with Jonathan Spector, 24, comprise what could be the largest Jewish contingent on a single team in the U.S. squad’s history.”

Maybe because the goal they scored against England was lame? We all saw that mistake made by the English goalie, and conspiracy buffs â€” and the world loves Jewish/American conspiraciesâ€” might even think it is a case of World Cup match fixing. Perhaps the English goalie made a deal for some White House stimulus money to let that one through.

Whatever the reason for the lack of love from the officials – Team USA, we love you, and hope things go your way!

UPDATE: And in the final minutes – Donovan scores and Team USA beats Algeria to advance to the next round!