Leader of the… Pack 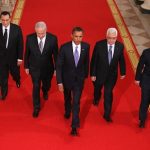 What is a Cairo based newspaper editor to do, when the nation’s leader helps to promote peace talks, but doesn’t get what is deemed to be the right place in the official photograph of the event?

I can see moving your leader to the front of the peace pack, and having him lead Netanyahu, Obama, Abbas, and King Abdullah II, but why did they have to make his necktie dress to his left instead of dress-right?

And why did Al Ahram decide to re-color some neckties? This is nearly as fun as Kremlinology. I will definitely ponder this as I fast. The official photo is above. The Al Ahram “doctored” photo is below: 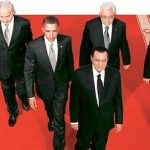