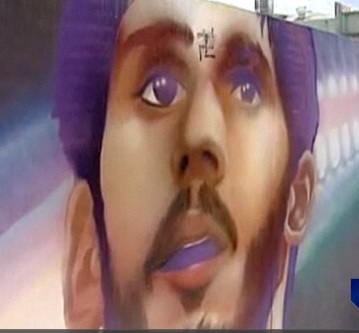 The Sacramento Police Department is investigating as a possible hate crime graffiti painted on a mural of Sacramento Kings players in the midtown area.

Police Department spokesman Officer Konrad von Schoech said a report was received about noon Wednesday that a swastika had been painted on a plywood mural at 16th and R streets. The backward swastika was painted on the forehead of Kings player Omri Casspi, who is from Israel.

“This act of hate and intolerance is despicable and cowardly, said Senate President Pro Tem Darrell Steinberg in a written statement. “It is all the more offensive because it occurred on the eve of Rosh Hashanah, the celebration of the Jewish new year. As residents of Sacramento, we are fortunate to live in a community that respects and draws strength from our individual differences. But we also are united in condemning the cowardly acts of those who wish to sow fear, hatred, and anger toward others based on their religious beliefs.”

“We take this kind of incident very seriously,” von Schoech said. “Any time we have this type of hate symbolism, it elevates the severity.”