Is Israel Behind Egyptian Shark Attacks? 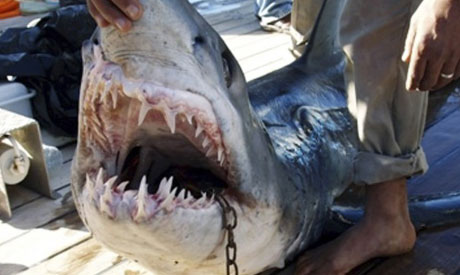 Shark caught at Sharm El Sheikh. Why was it carrying a bill from an Eilat Hotel?

But according to Egypt’s national television news, the hypothesis is that the shark attacks off the beaches of Sharm el Sheik in Egypt are due to Israel and its Mossad intelligence agency. Al Ahram online Egypt’s largest and oldest newspaper reports in its Tuesday edition that the governor of South Sinai is saying that the recent attacks by sharks on European tourists to Egypt is an Israeli conspiracy.

Speaking on “Egypt Today” yesterday, a specialist introduced as “Captain Mustafa Ismael” said that the sharks involved in the attack are ocean sharks and do not live in Egypt’s waters. Captain Ismael said that Israel planted a GPS in sharks and have them attack only in Egypt and not in Eilat. General Abdel Fadeel Shosha, the governor of South Sinai, backed Ismael’s theory. In a phone call to the TV program, he said that it is possible that Israeli intelligence, Mossad, is behind the incident and that they are doing it to undermine the Egyptian tourism industry. He added that Egypt needs time to investigate the theory.

A Sharm El Sheikh marine biologist slammed the theory. Mahmoud Hanafy, professor of marine biology at the Suez Canal University, said it is “sad” that Egyptian national TV helped perpetuate the theory that the shark, which injured four tourists and killed one this week, may be controlled by Israel. he said the Oceanic White Tip shark, blamed for the attacks, does indeed exist in Egypt’s waters.