No Oscar Or Cesars for Israeli Films in 2011

Oh, remember the days of old when Israel was in the running: Like in 2008, when Beaufort was a nominee; or 2009, when Waltz With Bashir was among the nominees; or even 2010, when Ajami was a classy tender contender?

Perhaps it because the film that Israel put forward for consideration was “The Human Resources Manager,” a dark comedy that is not about Israel’s wars or direct conflicts. 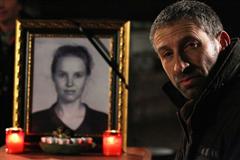 Eran Riklis (The Syrian Bride) is the director of “Shlichuto Shel Hamemune Al Mashabei Enosh” or “The Human Resources Manager,” a very dark comedy about an HR Manager at Israel’s largest bakery who must accompany the deceased body of a young Russian woman, the victim of a homicidal suicide bomber, from Israel to her hometown. Many of the characters are socially dislocated and have no names; they are known by their job titles. The selfish career-focused HR Manager might find redemption on his unusual road trip.

Earlier this month, the Cesar nominees were announced, and Israeli films were not among its foriegn language nominees. The French film awards, in their 36th year, selected American actress Jodie Foster to preside over the awards, and will give a special award to American Quentin Tarantino. A film by Roman Polanski, The Ghost Writer, is expected to sweep the Cesar’s. It is in English. HORRORS, WHAT GAUL! But as for Jerry Lewis and Israel… they are out in the cold for 2011.

* Note: Kristin Scott Thomas has been nominated for her acting in Sarah’s Key, directed by Gilles Paquet-Brenner, and based on the novel of the same name by Tatiana de Rosnay, which is a darling of Jewish reading groups worldwide.