The Public and Private Sector Clowns of Israeli Energy

Y’all can be proud. I’m embarrassed.

What can we learn from the new energy finds off the coast of Israel? That Israeli businessmen are stupid and that Israeli politicians are lazy chazers. This is not Israel’s brightest moment. 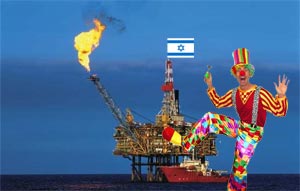 Israel and its supporters were absolutely giddy with the confirmation of a huge, 16 trillion cubic foot deposit of natural gas found off the shores of Israel in an area known as the Leviathan Field. Prime Minister Benjamin Netanyahu echoed these sentiments when he stated that “A day in which we learn about the Leviathan gas field, a day in which we pass a two-year budget, and a day in which we are told that the Israeli economy grew faster than most of the economies of the west and created 100,000 jobs – this is a day to be very optimistic about the Israeli economy.” National Infrastructure Minister Uzi Landau put it succinctly when he said “Today we received the most important energy news since the country was founded.” Giddy times indeed.

The Leviathan Field is being explored and developed by Houston-based Noble Energy and Israel-based Delek Group and Ratio. This partnership came about in 2007 when Yigal Landau and Ligad Rotlevy, the principals behind Ratio, gambled $40 million of their own money to acquire the rights to an offshore license neighboring existing Noble and Delek fields. With promising seismic data, Ratio sold a 45% stake in the field to Delek and a 40% stake to Noble. That field eventually became Leviathan, said to be worth as much as $90 billion at present market prices. Ratio’s market capitalization is now approaching $1 billion as a result.

Pretty exciting right? But wait. There’s more. While Ratio’s founders, Landau and Rotlevy, come from wealthy families, they still had outside investors. One of these was building contractor Shlomi Shukrun, owner of a construction company called Globus. In exchange for agreeing to vote with Ratio in favor of a rights offering in 2005, Globus was promised 15% of Ratio’s shares in exchange for their face value. They also promised to play Globus $2000 a month for advice on investor relations. There was also an issue of a promised 4.5 million NIS payment from Ratio to help cover Globus’ losses after the rights offering. In any case, by 2007 things went sour between Ratio and Globus. Very sour. It’s business though, right? Shit happens.

Shukrun sent a thuggish gentleman called Yehezkel from Naharia (reportedly a member of a Georgian crime syndicate), to Landau’s house in tony suburb of Savyon. He left an envelope on Landau’s SUV with photos of his car, home etc. That was seen by Landau and Rotlevy as a threat, and, scared shitless they asked around and received some shocking advice:

Landau consulted Adv. Eli Zohar, senior police officers, and others, and all of them advised him to not to turn to the police, but to get himself a criminal of his own, preferably from the top league. Landau approached Meir Abergil, and in 2007 all the parties met at Kfar Truman.

Each side to the dispute showed up with lawyers and each side was backed by an underworld figure. Once assembled, the criminals explained that they could not in fact serve as arbitrators in this dispute simply because they weren’t qualified. “We can resolve disputes over drugs, fruit and vegetables, and trading in women,” they said, “but we can’t play on this field.” The criminals then urged the businessmen to find a suitable expert to help resolve their dispute. Apparently however, Ratio and Globes couldn’t do the simplest thing and kept returning to the criminals, urging them to take on the arbitration.

Eventually, the criminals themselves, frustrated by the businessmen, went out, made inquiries amongst their lawyer friends, interviewed a few candidates and found attorney Dr. Assaf Baram, an expert deemed to be fair minded, who agreed to act as an arbitrator. They told Baram that he was “…free to decide the dispute as he saw fit, as law and justice demanded. ‘Decide what’s right according to the law,’ they said, ‘we don’t care.'”

It then took the lawyers eight months to draft an arbitration agreement. The agreement stipulated that the sums involved would be limited to 6 million NIS, but with the sudden rise of Ratio’s share price, Shukrun filed a motion in court to void the arbitration agreement. Abergil and his brother are currently in an Israeli prison awaiting extradition to the U.S. to face a 32-count federal indictment. Globus felt that Baram was being unfair and he was fired as an arbitrator. The motion to void the arbitration will be heard in January and all the parties involved, except for the criminals look like a bunch of clowns. These are hardly the stellar representatives of the much vaunted Israeli business community, and yet, at least on the Ratio side, they are well established and well respected members of the business community. Is this how big business is conducted in Israel??

But that’s not all! There is more clownish behavior related to this tremendous energy find! See, one of the inducements that got foreign energy companies like Noble to invest in offshore energy exploration was a 1952 petroleum law that offered some of the world’s best advantages to energy companies. These included low royalties and low corporate taxes on exploration. This petroleum law didn’t matter in the decades when Israel’s lack of energy resources was often the butt of jokes. To date, Israel gets 71% of its electricity from coal shipped in from Russia. However. for the last several years, every two-bit hustler in Israel knew that the existence of significant energy reserves off the coast of Israel was a serious possibility. But only in early 2010 did Finance Minister Yuval Steinitz decide to get off his butt and do something about the ancient petroleum law. By then important reserves had already been found. And instead of being reasonable, the committee he appointed made recommendations that were chazer-like. These included steep retroactive tax increases of 20% to 60% on windfall profits. And he was arrogant about it too. He told the Wall Street Journal “Israel is sovereign to make its own decision and change its tax regime.”

What he should have said was “We fucked up. We were busy clowning around and forgot about the law on the books. Now we’re reduced to acting like a tin pot dictatorship flexing its muscle. Sorry. We have shwarma for lunch every day at the ministry and it makes us sleepy in the afternoon.”

The committee’s recommendations are still subject to cabinet approval and Prime Minister Netanyahu has yet to comment on the subject.

Shares in energy companies plummeted on news of the tax increases. Delek Energy said it would have to reevaluate the Tamar field. “This really threatens our ability to deliver the project on schedule,” said Gidon Tadmor, the CEO. Funding for development of the gas field is now on hold, he said, due to banks’ concerns about the new tax regime.

What a mess. How massively embarrassing.