This just in from Tribefest.

Yesterday opened with speeches and performances from â€œHebrew Mamacitaâ€ Vanessa Hidary, TV actress Mayim Bialik, and Congresswoman slash breast cancer survivor Debbie Schultz. Author Aaron Cohen was Debbie Downer, reminding us of the violence going on in Israel. â€œWe can’t have a celebration without a little sadness,â€ he said. â€œWe are Jews.â€ 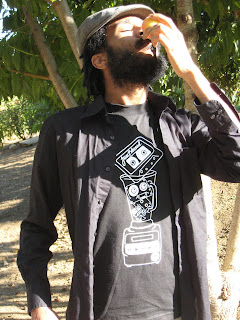 I attended a panel promoting a documentary-in-progress called â€œPunk Jewsâ€ by Evan Kleinman and Saul Sudin. The film describes a 21st century context for Jewish identity: Progressive east coast Jews are exploring their religion through punk, noise rock, comics, performance art, and the like. Panelists included the filmmakers as well as two such hipsters artists: Elke Sudin (Saul’s wife), whose painting series “Hipsters and Hassids” addresses the inevitable culture clash in Brooklyn; and Yitz Jordan (â€œY-Loveâ€), who strengthens his connection to Judaism through his badass hip hop music.

Yitz was full of soundbites. He called himself â€œthe Amy Winehouse of Jewish musicâ€ and described the Torah as â€œGod’s Wikipedia.â€ He and Evan stressed the need for Jewish self-exploration rather than total restriction to tradition. They complained about the commoditization of the Jewish label, to which Saul added, â€œLabels are for shirts.â€

Check out the trailer for Punk Jews: