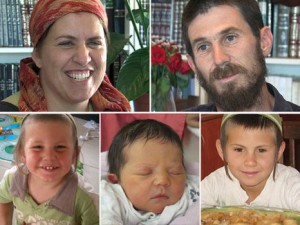 The military censor lifted the publication ban and now it can safely be revealed that the killers were Amjad Awad 19, and Hakim Awad 18. The two suspects were from the village of Awarta, adjacent to Itamar where the Fogel family lived. The arrests were made possible because the parents struggled with the killers prior to being murdered and thus much DNA evidence was left behind. During the course of the investigation, over 100 DNA samples were taken from residents of Awarta.

Hakim’s father Maazan was active in the Popular Front for the Liberation of Palestine and served 5 years in a Palestine Authority jail for murdering and burning the body of a female cousin. Hakim’s uncle, Jibril, a PFLP member died in a firefight with the IDF 8 years ago. In 2002 he transported a terrorist to Itamar in an attack that saw the wife and three children of Itamar security officer Boaz Shevo shot dead in their home. Amjad, 19, is a student who has worked in Israel. Both had been planning the attack for several days and tried, but failed, to obtain weapons from PFLP activists. The suspects, members of the same clan showed security forces on Thursday how they snuck into Itamar.

They first broke into an empty house looking for weapons and found a flak jacket, a helmet, a cartridge of bullets and an M-16. They then went to the Fogel house and immediately stabbed Yoav and Elad. They then struggled with and killed the parents. Then, they left the house but returned for Ehud Fogel’s M-16. That’s when they heard the baby Hadas crying and slit her throat. The unrepentant killers told investigators that had they known that there were two other children in the house they would have killed them too. Upon their return to Awarta, a cousin helped them dispose of their bloody clothing and an Uncle went to Ramallah to sell the stolen weapons. The weapons were later recovered at a family member’s home by the IDF. The IDF claims that 6 family members tried to help them cover up the crime.

Some of the suspected accomplices are as follows (as per the Jerusalem Post):

Salah Aladin Salim Awad, 31, of Awarta, is a PFLP member and Hakim’s uncle. He is suspected of aiding and abetting the suspects in covering their tracks after the murders, telling them to burn their blood-soaked clothes, and sending the firearms they stole from Itamar to a friend in Ramallah… Jad Avid, 31, of Ramallah, is suspected of hiding the firearms after receiving them from Salah. He was arrested in his home and the firearms were seized by the IDF… Maazan Niad Awad, 43, of Awarta, is Hakim’s father and a PFLP member… Mahmed Saeed Awad, 26, is a PFLP member in Awarta who the suspects turned to with a request to procure firearms ahead of the Itamar attacks.

The Awad clan is the main clan of Awarta. Both the village chief and his deputy are members. However, this heinous crime seems like it was carried out without the implicit help or approval of any Palestinian group. Not that that helps the Fogel family much. Stay tuned for more details as they become available.