On my fifth trip to Israel I made it my mission get my hummus on. I decided I would sample some of the hummus I’ve had on previous trips and indulge in a few newcomers…at least to me.
My journey began in Tel Aviv and upon arriving at the hotel, i was ready for action.
Hummus Mashawsha:
Only a ten minute walk from the hotel I arrived at Mashawsha. I ordered hummus ful straight up. Ten minutes later it arrived table side. It smelled delicious and looked good too. A simple presentation of beans (chickpea and fava), parsley puree with a golden rim of olive oil was perfect. The hummus was piping hot and perfectly balanced. It was exactly what I needed after traveling 14 hours and not eating a proper meal. I didn’t want to do anything but take a nap after indulging. 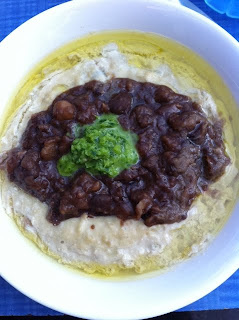 Ha-Suri:
I was taken to Ha-Suri by some local friends. We arrived with a large group and sat outside in the blazing heat while waited patiently for our hummus. I ordered a lemonade, the quintessential compliment (other might argue a bottle of Coke or beer), to a bowl of hummus. I had a great view of the man in action as he made my bowl of goodness. Assembling this concoction was like second nature for this gentleman as he began with a ladel of chickpeas, drizzle of tahini, dollop of broad beans, spalsh of lemon juice and olive oil, sliced egg, and finished with a dash of paprika. This hummus looked like a work of abstract expressionist art. The dish was surprisingly light and a perfect portion size for an afternoon snack. 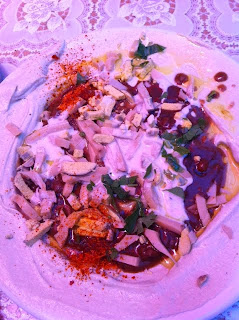 Hummus Bethlehem:
Before heading over to the soundcheck, the promoters decided to take us out for a quick hummus. This was to be my first hummus masabacha experience. This was one well seasoned hummus….complete with healthy doses of paprika, cumin, black pepper, chopped parsley, lemon juice, tahini, and olive oil. The lemon juice was a really nice complement to all the spices. Topped off with a whole sliced egg and served along side whole jalapeÃ±os, onion wedges, and pickles, this meal was FILLING! 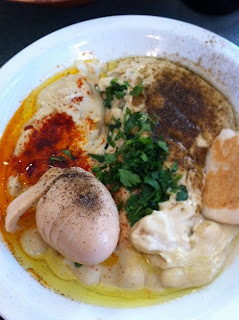 Abu Hassan:
Within 30 minutes of my first arrival in Tel Aviv, in 2004, Abu Hassan was the first Israeli hummus I’d ever consumed. I remembered it being quite an experience. Located in Jaffa, this place is slammed with locals, cab drivers, and a wait staff who scream orders at the top of their lungs…it reminds me of NYC in some ways. While the decor has cleaned up a bit, I think there was some renovations, this place hasn’t changed a bit. The hummus here is time-honored. What I really love about this place, aside from the atmosphere, is the accompanying garnish (a mix of lemon juice, garlic, and finely diced jalapeÃ±os). I must admit the hummus was a little under salted, but once i poured this simple garnish atop the mix of hummus ful and masabacha, it was perfect. Washed down with some lemonade….cue nostalgia. 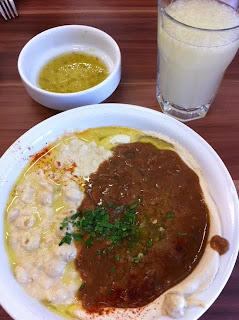 Hummus Lena:
After wondering around the narrow market streets of the old city in Jerusalem, I finally found Hummus Lena (a humble establishment with four or so tables). This was my first hummus in Jerusalem. After waiting patiently, with a good view of the hummus being assembled, I was ready to indulge. The serving size was smaller than most that i’ve had. The looked was nicely layered with an aura of golden hue. A mixture of pureed chickpeas, crushed whole beans (chickpea and fava), a heavy pour of oil, and a light drizzle of lemon juice…it tasted AMAZING. this was some of the best olive oil i’d ever had…seriously unctuous stuff. 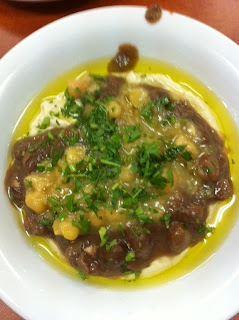 Other hummus joints, worth checking out, that i’ve indulged at on previous trips to Israel are:
Abu Adham
Abu Ghosh
Hummus Raquel
bon appetit.