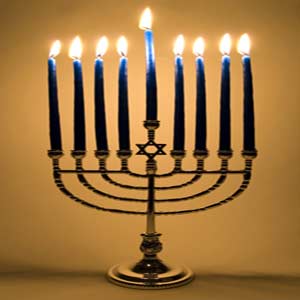 The bank manager at Citibank ran over to me when I came by this week to show-off the company menorah. Each branch received a menorah. Well, they actually were sent two. What had happened? My friend the manager explained. The first one arrived with only one on-off switch to control all the lights. That was replaced a week later by a new menorah that had one on-off switche for each light. While there we noinstructions included, the bank must be relying on the wisdom of the employees to know what to do.

The entire episode prompted another great conversation with my banker. (As one of the only customers at that branch who is a rabbi, we end up discussing every holiday as they arrive in some detail.) When he was early in his career as a banker, he brought in an electric menorah himself to display at the bank. In his native Russia, the thought that you could even have a menorah in a public place was unthinkable. He proceeded to light all the lights at once for the holiday to really promote Hanukkah and his menorah.

The next thing he knew, a Jewish customer approached and castigated him for not lighting them one at a time. This Russian Jewish immigrant, a junior banker trying to make a difference, was being given lessons in menorah lighting at the bank. Yes, we sometimes overlook the good that people are trying to do. Instead we make sure they are doing things the way we want them, ignoring or forgetting to thank them for trying in the first place.

Later in the day I had to go into an adjacent Wells Fargo branch. The Wells Fargo Christmas Tree dwarfed the 4-footer at the Citibank. It was festooned with a myriad of ornaments and candy canes. Arranged around the base were presents, a stuffed fake reindeer and snow, making a real Christmas diorama. I searched for a menorah and didn’t see one. I asked a banker walking by, â€œExcuse me, is there a menorah too?â€ She looked around and said they didn’t have one. To which I replied, â€œwell you better catch up with your competition â€” Citibank has one!â€

At Citibank, while the menorah was small, understated, and directionless, it still fared better than Wells Fargo. There may be other branches of Wells Fargo that are doing things differently in Jewish areas. But Citibank made the effort to ship these menorahs to EVERY branch. It didn’t matter if they were in an area with Jewish clients.

I sometimes wonder if my shopping, banking, or car repairing will depend on a company’s decision of how to celebrate the holidays with their customers. Is there some subliminal or outright conscious decision that I make which determines my behavior toward one bank or another? Can a holiday decoration turn me from being a customer to being critic?

Honestly I don’t expect, nor would I want to see, a 7 foot high menorah with golden inflatable driedels â€” though that could look kind of cool. But I think in this day and age we can expect some kind of token concession to Hanukkah.

Maybe I’ll just leave it to the expensive consultants to offer suggestions to corporate America to tell them if a menorah is a good idea or not.

Or they can take the advice from a Rabbi for free: a menorah of any size or shape is greatly appreciated.