The Economics of Generosity: A Homeless Man’s Advice to Restaurateurs 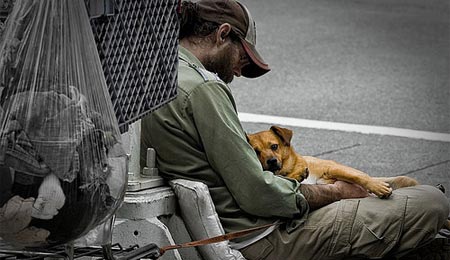 If you want your restaurant to prosper, give free food to the homeless. This is according to the anecdotal evidence put forward by my homeless friend Yehuda. Yehuda has been on the streets for five years in Los Angeles and can can’t shake a heroin addiction. He lives on small change from kind souls â€¦ and restaurants. Yehuda once had a thriving window dressing business and a million friends. Today he depends on people’s leftovers and meals from generous restaurants for his fare.

Yehuda taught me this important lesson when a recently opened, kosher-certified, national franchise shut down, much to the surprise of the neighborhood. The story followed an arc that Yehudah had seen before.

Yehudah began approaching the new fast-food sandwich shop that had opened on his regular stretch of road. They were generous with Yehuda, offering him a sandwich as much as once a day. The food went a long way to sustaining him, and a few other homeless Jews who call Pico-Robertson home.

The new gleaming store was packed the first few months. But as time went on, the crowds became thinner. Eventually, the free sandwiches became less and less frequent. The worse business got, the more they resented him. Soon they stopped giving him food. Within months the restaurant had closed its doors. A successful national franchise, on a popular restaurant block, with special kosher certification, was now a thing of memory.

If this were one isolated case, it would not prove anything. But it was not.

Over the course of these five years, Yehudah has seen other restaurants come and go. The same pattern of generosity followed by hostility accompanied the downfall of all those restaurants. There was one place that chased him out with a broom â€” they were closed within a month. It didn’t matter that Yehudah warned them against treating the homeless this way. He warned them that their tight fist, would be their downfall. But who is going to listen to a junkie homeless man for business advice? Nobody it seems.

One of the businessmen that didn’t treat Yehudah well, who subsequently opened a new shop after his latest one failed, began to see that Yehudah had a point. He started giving Yehudah food every day. Whenever Yehudah stopped by, he was sure to walk away with something fresh to eat. Yehuda said the business was booming.

I went to check this out for myself.

Passing by this establishment for the last six months, I can attest that the place is thriving. Customers line up for food. They run out of product all the time. The owner is happy, and the business, even in these times when small restaurants are really hurting, is thriving.

Restaurants often chase the homeless away, instead of inviting them to the backdoor for a warm meal. We, the customers, loathe their pan-handling when we are trying to have a coffee with friends. We resent them for interfering with our plans to go and get something to eat, and for making us feel guilty. Let someone else give them a hand, I have heard said too many times.

Prosperity is not deserved, but is a blessing bestowed by God. The Torah teaches that when a person puts out his or her hand, it is a commandment to fill it. Therefor it is not surprising that the Torah’s economic principles can be a lesson to us all. Generosity begets blessing.

Hopefully, someday soon, our MBA students will learn about the economics of generosity, and restaurants that want to have a fighting chance, will adopt Yehuda’s simple business plan.