Jewlicious 8 Begins in Less than 2 Hours! 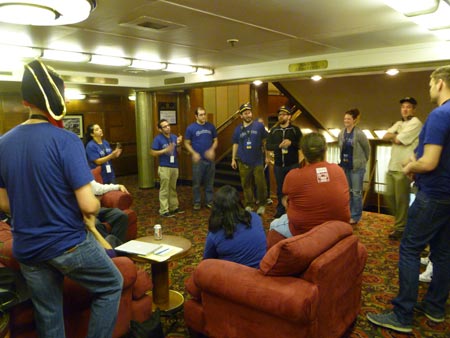 A bunch of Jewy stuff happened this week. But you didn’t read about it here.

In no particular order: Turns out Hitler was such a dirty fucker, who had bastard offspring, and they’re French. And they want royalties on Mein Kampf? Fuckers, right? Oh and recently unearthed secret photos reveal that Hitler was vain. And weird.

And then there was a new video by the Groggers and noses:

And a new Weinergate: It required a ruling by a judge to let greedy kosher hot dog vendors at Mets Stadium know that kosher hot dogs sold on the Sabbath are not so kosher. Seriously?? Next? Iranian terrorists in Thailand, planning on attacking Jewish targets in order to advance the cause of radical Islam, cavorted with prostitutes before they got captured. Fun! By the way Mahmoud? That lady sitting on your lap was a dude. Just sayin… Back in England, anti-Israel students who set up a mock Israeli checkpoint at the London School of Economics, were pelted with water balloons by a group of Jewish students. The organizers of Destroy Israel Week, I mean Israel Apartheid Week, complained to LSE’s administration despite the fact that the Israelis used non-violent water balloons as part of a legitimate and peaceful protest against the occupation of their campus by smug, self righteous pricks. Free! Free! LSE!

Anyhow, we didn’t write about all this stuff because we were busy setting up and preparing for our 8th Annual Jewlicious Festival. This year’s Festival features a number of speakers, educators, innovators and entertainers including Mayim Bialik, the Aggrolites, Fool’s Gold, Esther Kustanowitz and more! Every year I am amazed at how this comes together, thanks to the help of our dedicated staff, partners and a veritable army of volunteers. There have been people coming and going non stop all week doing one thing or another, all in furtherance of putting together the best Festival ever.

And it’s been a challenge. It’s a challenge every year and somehow we pull it off – it takes a village right? And of course, a special thanks go out to our amazing sponsors who helped us put this together. I’ll try to write some more about the program as it happens – but you know, Shabbat. So stay tuned and all that but just wanted to pop in and let you know we’re all cool here.