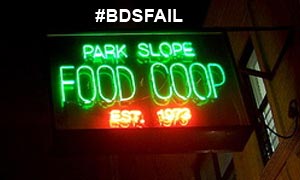 Samantha Bee over at The Daily Show investigates the proposed boycott of Israeli goods at the Park Slope Food Coop in Brooklyn. She interviewed BDS activist Liz Roberts and on the other side, Barbara Mazor of More Hummus Please. See, one of the products that would have been affected by the ban is Sabra Hummus. In the US, Sabra is made in a factory in New Jersey, but it is partly owned by the Strauss Group in Israel. I personally boycott Sabra because any factory made hummus is gross, frankly. But I digress.

The Park Slope Food Coop has 16,000 members, each of whom have to volunteer to work at the coop at least 3 hours a month. Why do so many people care about what happens at a grocery store in Brooklyn? Well, see, Park Slope used to be a pretty rough area. In the 80s Broadway actors, artists and uhm… Lesbians began moving to Park Slope, attracted by its low rents and proximity to Manhattan, earning it the name “Dyke Slope.” As you well know, artists and homosexuals are the shock troops of gentrification and once modest Park Slope has become a residence of choice for young wealthy families, attracted by its leafy neighborhoods, kid friendly Prospect Park, trendy Farmers Market, Cafes, eateries and… its proximity to Manhattan. In the media capital of New York, Park Slope receives a lot of attention and its residents are seen as trend setters in many realms, despite the fact that on the street, it’s mostly mommies pushing crazy expensive strollers.

The vote at the Coop was a vote by 1600 core members to decide on whether to have a vote of all the membership about whether they should ban the sale of the 5 “Israeli” products, including NJ-made Sabra Hummus, Soda Stream and Roland Brand “Israeli Toasted Pasta Couscous (???). In the end, the proposal to vote on a ban was voted down 1005 – 653, handing the BDS movement yet another highly visible failure. In Brooklyn, 1005 people realized that the BDS movement isn’t about peace between Israel and the Palestinians, but is about the destruction of the State of Israel, as was noted by Norman Finkelstein himself. Whatever. Haters gonna hate…