One of 3 Israeli postage stamps for the Olympics 2012

No Israeli athletes or coaches jumped into the stadium with Queen Elizabeth II, but 36 were part of the official Israeli delegation to the 2012 Summer Olympics in London – the 30th Olympiad. In addition to marking the 40th anniversary of the murders of Israeli athletes in Munich, these games mark the 60th anniversary of an Israeli Olympic delegation. Israel first participated as a sovereign state at the 1952 games in Helsinki.

Israelis will mostly participate in gymnastics (artistic and rhythmic), judo, swimming, shooting, and sailing. Will an Israeli win a medal for the sixth straight time in 20 years? Only time will tell.

Israeli athletes to watch include:

Shahar Zubari, a windsurfer, will carried the Israeli flag during the Opening Ceremonies. He is a past medalist.

Misha Zilberman will be seen with a badminton racquet and Shahar Pe’er will face Maria Sharapova with a tennis racquet (She lost to Sharapova 6-2, 6-0 in a 65-minute match) Andy Ram and Yoni Erlich will faced Spain’s Marc Lopez and Marcel Granollers and won at Wimbledon 7-6 (7-5), 7-6 (73) to move into the second round.

Alex Shatilov and Felix Aronovich will attempt to qualify in artistic gymnastics qualifiers.

Tommy Arshansky, 20, will compete in judokam as will Gordon Pollak. Sadly, Arshansky’s first bout was a face-off with European bronze medalist Jeroen Mooren from the Netherlands.

Arik Ze’evi, 35, is competing in his fourth Olympics in judoka.

Swimmers to watch include Gal Nevo, 25, in the 400-meters individual medley heats; Amit Ivri in the women’s 100m butterfly; and Imri Ganiel, in the 100m breaststroke.

Americans Donald Sanford, a sprinter, and Jillian Schwartz, pole-vaulter, are new to Israel and will compete for the blue-and-white.

Team USA athletes to watch include:
David Banks, a graduate of Stanford and Princeton is a returning Rower, and Anthony Ervin and Jason Lezak will hit the pools for Swimming. Tim Morehouse, a graduate of Brandeis, will fence; Sue Bird will compete in Basketball, while Alexandra Raisman, Julie Zetlin, and Steve Gluckstein will compete with Team USA gymnastics.

Team Italy athletes to watch include soccer star Mario Balotelli. Mario, 21, was raised as the foster son in a Jewish family in Concesio, a village just east of Milan. Italian newspapers ran photos of him embracing his mother Silvia after Italy’s victory over Germany in the Euro competition. Italian Jewish monthly Pagine Ebraiche hailed his family as one to be respected, an Italian Jewish family that suffered during the Shoah that welcomed a child of Ghanaian Italian heritage. Mario’s sister studied in Herzliya at the IDC. 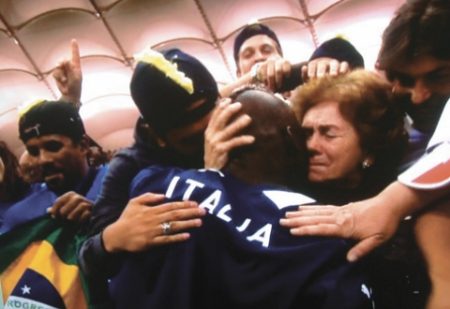 A mercurial Balotelli and mother, Sylvia, embrace at Euro 2012

After Balotelli visited Auschwitz with his teammates earlier this Summer, a racist website (Stormfront) vehemently criticized Balotelli, with antisemitic insults. One commmentator said, â€œHe’s black and Jewish. He should play for Israel, not Italy.â€ Irish fans at Euro 2012 made monkey sounds at him at one match.

Team Australia athletes include Steven Solomon, 19, who will run the 400m and 4x400m relay.

Note: Contrary to popular perception, the London 2012 logo is not Lisa Simpson providing sexual services to a man, nor is it a secret code that when rotated spells out “ZION.” But I must admit, I really enjoy the Israeli stamp design that spells Israel across the top in two languages, and incorporates a London doubledecker bus.

Note 2: It is about participating, and not about the medals… This weekend, Golan Pollack was defeated by France. Yakov Toumarkin, a swimmer, came in sixth in his heat in the 100m backstroke heat, but did not make the Top 16. Misha Zilberman lost his second Group I match to Singapore’s Derek Wong, and Nimrod Shapira Bar-Or was 21st in the 200m freestyle, but will not move on to the semifinals.