Death in a House of Worship: Contextualizing Hate 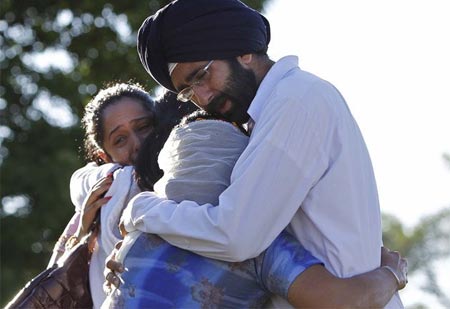 “In nomine Patris,” intoned my grandfather, patiently. Eight years old, perched on the arm of his favorite sitting chair, I responded, “In the name of the father.”

My most vivid childhood memories are of my grandfather. A first-generation American, he spoke to me in a gravelly Oklahoma accent salted with Italian nursery rhymes and Latin prayers. He was a quiet man raised in a rigid blend of cultures rooted in old-world Roman Catholicism and Dust Bowl depression. My grandfather served in Okinawa in WWII. From the day he returned to the day he died, he never spoke a word of that war, and he never missed a day of mass.

My grandfather knew hardship. He knew what it was to be an unwelcome immigrant, to live in poverty, and to feel forsaken in the fight of a brutal war. Many pass knowledge of struggle and pain on to their children as cautionary tales, a warning to insulate oneself and not to trust. Too often this upbringing breeds intolerance, anger, and even hatred toward others. My grandfather was not that sort of man.

My grandfather was the sort of man who cut good whiskey with a little water, to savor the flavor just a bit longer. He was a man who romanticized the story of his mother’s young death and his father’s subsequent rapid descent into senility: “He died of a broken heart,” he’d murmur. Even in old age, he recalled his wife’s beauty and small waist when they first married. He joked of her haphazard cooking experiments when unsuitable foods were combined just to have enough for a meal. His stories weren’t of lean times and loneliness; they were of love and cohesion.

My grandfather never knew of my conversion to Judaism. My own father has never openly approved or spoken of my faith. In the past several years, I’ve continually struggled to combine the culture in which I was raised, a culture often resistant to nontraditional life choices, with the culture I’ve adopted, one perpetually tied to complicated internal and external politics. All too frequently, these two worlds have seemed immiscible.

The shooting at the Sikh gurdwara this week in Wisconsin brings all of this to mind once again. The response to this tragic, hate-inspired event has overwhelmingly been a call for solidarity. Sikhs are not calling for revenge; their reaction has not been political mudslinging or reverberating hate. Instead, there have been countless vigils, prayer services, and support efforts. And it is breathtaking.

In Judaism, we say of the dead zichronam livracha—may their memories be a blessing. In the midst of devastating tragedy and bereavement, there is a blessing to be found in loss, namely, a reminder of our most basic humanity. The shooting at the gurdwara is not isolated to the Sikh community; it is a loss of human life that affects us all. I believe my grandfather understood the true breadth of loss. He understood that grief and hardship are a prompt for unity and resilience. He understood the need for renewal and faith, as well as forgiveness.

In difficult times, we turn to the comforts of our traditions and faith. My prayer is that we may draw on these traditions and our communities for support, but also reach beyond them. I pray for renewal and for solidarity. I pray that memories of the dead, of our fathers, and of our grandfathers be a blessing to all, and that their names never be forgotten.
Those who wish to join me donating to a relief fund for the families of shooting victims may do so here: http://www.neverendinglight.com/index.php/we-are-sikhs

Tara works as an editor for the Russian Academy of Sciences and interns for The Groundswell Movement. Formerly of the University of Southern California Law School, she is currently applying to graduate programs in International Relations.