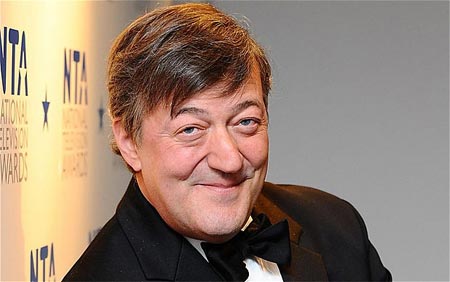 Usually, the only birthday of a self-described atheist we honour on here is Muffti’s, but in this case I’ll make an exception.

British actor / author Stephen Fry* is turning 55 today. It’s not as if we needed to remind him of that as, to put it in his own words, “I don’t need you to remind me of my age, I have a bladder to do that for me”.

Happy Birthday!
Thank you so much for many, many laughs!

*Yes, his maternal grandparents were Jewish, so shut it.

ed. note: We incorrectly wrote that Stephen Fry turned 65 when in fact he had turned 55. We apologize for any distress we may have caused Mr. Fry (who pointed out our error on twitter) and his legion of fans. When I first read this post I thought, “He looks pretty good for a 65 year old!” but now I’m just thinking that he looks ok. Happy birthday sir!

Well my mother is Jewish and I'm "only" 55, but otherwise thanks jewlicious! http://t.co/INUm7Rv3