Jews and the Pussy Riot Debacle. Russia is Messed up! 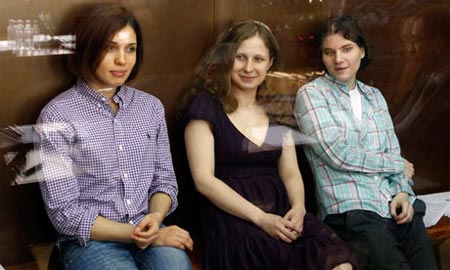 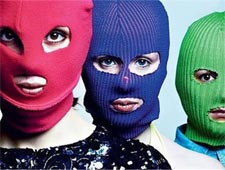 By now everyone has heard about the Pussy Riot affair in Russia. Just to recap, a trio of young Russian women, members of a punk band called Pussy Riot, were sentenced to two years in prison recently after they were found guilty of hooliganism for performing a song critical of Russian President Vladimir Putin in a church. The Pussy Riot members were charged after screaming, “Mother Mary, please drive Putin away,” in a 55-second act of protest last February inside the Christ Savior Cathedral, one of Moscow’s fanciest churches. The sentence, which many found excessive, has lead to protests around the world and support from a number of celebrities and topless Ukranian women:

Back in Russia, this incident has galvanized pro-Putin and Conservative religious elements against what they see as foreign inspired scorn for the Russian Orthodox Church and Russia itself. So what happens when you get a defensive and angry bunch of ardent nationalists and religious fundamentalists together in one place, focusing on one issue? Well, as always, someone blames the Jews of course. The talk of Jewish orchestration of this incident became so vociferous, that the Lawyer for the band, Mark Feygin, felt he had no choice but to prove that he wasn’t Jewish by posting several documents on his (Russian language) blog attesting to his non-Jewish family’s lineage. These were a student ID, his diploma and his birth certificate.

How messed up is that? That someone associated with the defendants had to prove that he wasn’t a member of a Jewish international conspiracy whose goal was to, what? Embarass Vladimir Putin? Insult the Russian Orthodox Church? Is it any wonder that xenophobic Russian elements authored “The Protocols of the Elders of Zion?” And that said elements have beliefs that still resonate in Russia today? Given the way Vladimir Putin treats the country like his personal fiefdom, and crushes and eliminated his perceived enemies, there is no need for a vast conspiracy in order to cast aspersions upon the Russian government. In the meantime, FREE PUSSY RIOT! Woo.