I am seriously amazed that they pulled this off! Months of work spent slogging through bureaucratic and organizational challenges culminated last night in the opening event of the 1st annual Jerusalem Music Conference. The JLMMC is a unique event in that it’s a Conference and not a Festival. Conference participants are local and international music industry professionals and press who will be attending seminars till Thursday in Jerusalem and in Tel Aviv. Beyond the seminars and networking opportunities, participants will also enjoy a dizzying array of brief showcase performances by some of the leading, up and coming musical artists in Israel. The idea is to promote Israeli musicians to the conference participants, a big chunk of whom are Festival organizers from around the world. This will facilitate all important international exposure for these awesome acts, most of whom perform in English and are very accessible musically. 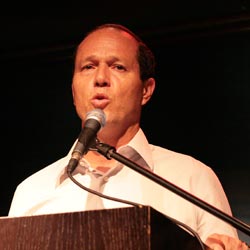 Last night’s event at the Zappa Club in Jerusalem was attended by all the usual suspects and received greetings from Jerusalem’s Mayor Nir Barkat himself in person! We managed to catch two showcases- Karolina (formerly of B’not Nechama) who held the audience spellbound with her incredible vocal stylings, and Boom Pam who performed an energetic set that was a mishmash of klezmer, surf and punk. Kind of like Dick Dale meets the Sex Pistols meet Gogol Bordello. Or something. Whatever. It was awesome and a big Kol Hakavod goes out to Goldstar Zappa, Impressario Carmi Wiseman (2bvibes), the City of Jerusalem, Jerusalem Venture Partners, The Foreign Ministry, the Ministry of Tourism and everyone else involved in this unprecedented collaboration between the Israeli private and public sectors. Of course I also have to give mad props to Jeremy Hulsh of Oleh! Records who worked like a crazy man to make this happen. Tonight Alpha Blondy and Barrington Levy will be playing at Jerusalem’s Gan Saker (I can hear the sound check as I type this) and Thursday night there will be a closing party at LimaLima in Tel Aviv as well as an Infected Mushroom show in Jerusalem. 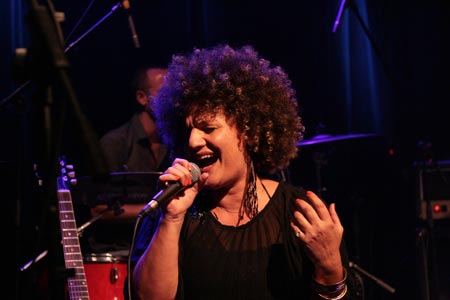 Karolina’s Showcase at the JLMMC 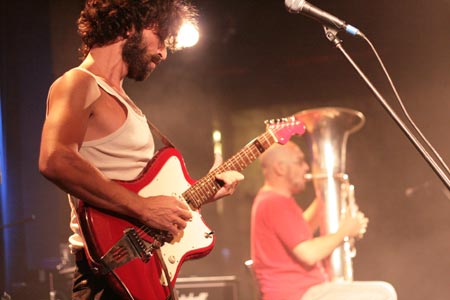 Boom Pam’s Showcase at the JLMMC

This is going to be a hell of a week! To find out more, you MUST check out the Jerusalem Music Conference Web site (full disclosure, I built it and the logo etc. with lots of help from Orly and her gang) right now! In the meantime, I shot some videos of Karolina and Boom Pam from last night for you to enjoy: