Dreaming of a White Hanukkah 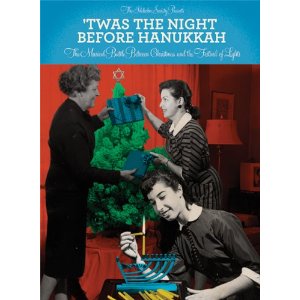 The Idelsohn Society for Musical Preservation was founded by Roger Bennett, Courtney Holt, David Katznelson and Josh Kun; and it consists of a small, dedicated team who are passionate about American Jewish music classics. Their earlier compilations include Mazeltov, Mis Amigos; Black Sabbath: The Secret Musical History of Black-Jewish Relations; and Songs for the Jewish-American Jet Set: The Tikva Records Story 1950-1973. The society is named for Abraham Zevi Idelsohn, a legendary Jewish musicologist and the writer of … wait for it… “Hava Nagila.” 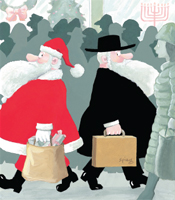 The theme of the CD should be paired with a white wine, a potato latka, and this new book by Rabbi Joshua Plaut, A Kosher Christmas: Tis The Season To Be Jewish” The book recounts how American Jews devised a multitude of unique strategies to respond to the Christian winter holiday season and how they influenced the transformation of Xmas into a joyous holiday for Americans of all religious beliefs, including composing the most famous Christmas songs, transforming Hanukkah into a Jewish Christmas, and creating a tradition of volunteering and patronizing Chinese restaurants on Erev Christmas (Eve)