In place of cards 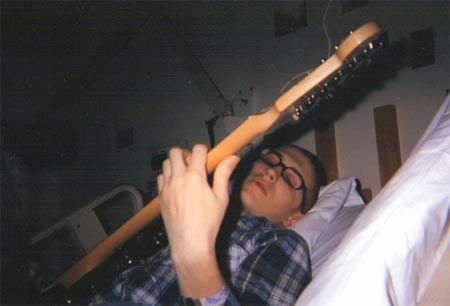 I was going to send all of you a holiday card (to Stephen Fry as well as sort of a repentance-thing, because I hope for nice gifts this year – anybody need a handwritten gift certificate for a game of minigolf from the 1995 holiday season?), but I’ve decided to give to a worthy cause in your honour instead.

When I met Joshua Neuman at Kelsey’s a few years back, I had no idea that I was talking to the author of a book I’d thoroughly enjoyed. Someone whisphered to me that he was “a big name in publishing”, but after a day’s trip from the Rhineland to Brooklyn, two hours on various subway trains, six flights of stairs, and still loaded to the brim with broad-spectrum antibiotics, my communicative skills were limited to attempts at two-word sentences and nodding encouragingly. But I recall that Joshua seemed to be a genuinely nice person. Plus he had the most pleasant male voice in the room, and I’m a sucker for pleasant voices.

Anyhow, I learnt only today that Joshua lost his younger brother to leukemia a few years ago. Now Joshua is working on a short film about his brother.
From the Kickstarter page of the film:
When Jonathan arrived at Tufts University in 1998, life started imitating art. He found a guitarist, bassist and drummer and pretty soon â€œThe Physicalsâ€ was the biggest sensation on campus. Johnny Physical was the sweet-talking, heartbreaker from the mean streets of New York who was everything that Jonathan wasn’t.

At the beginning of his junior year at Tufts University, Jonathan was diagnosed with leukemia. When he left college in the Fall of 2000 to begin cancer treatment, it seemed like his rock n’ roll dreams were shattered. But, two weeks into chemotherapy, when his blood counts were perilously low and he was at his most vulnerable, he decided to perform a concert in the hospital day room.

So please understand why I’m skipping the greeting cards this year. At least to random strangers. Unless you really want one.