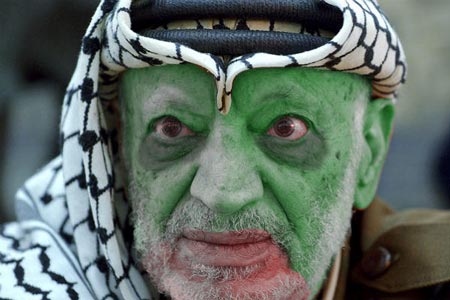 That’s what Suha Arafat, Yasser Arafat’s widow implied when she stated that there was a spiritual significance in the timing of her late husband’s exhumation, just two days before the United Nations vote granting Palestine the upgraded status of nonmember state.

“It was as if his soul was resurrecting” before the General Assembly vote, Suha Arafat told The Associated Press on Thursday at her home in Malta, sitting in front of a large portrait of Arafat, who for decades was the symbol of Palestinians’ struggle for an independent state. “It’s as if he was saying, `I am still alive and with you,'” she said.

That and “Give me some brains!” probably. For who or what else could have conceived the notion that Palestine is a state? Prior to the General Assembly vote, the U.N. was addressed by Palestine Authority President Mahmoud Abbas, a man whose term of office expired in 2009. A man whose government does not control 40% of his state’s territory – a state in which 1,700,000 of it’s citizens are being ruled by Hamas, a government that most of the Western countries that voted for statehood, consider a terrorist entity.

Real statehood for Palestine can only be achieved as the final outcome of peace negotiations with Israel, and yet there are no plans for such negotiations. It seems as if what’s left of Yasser Arafat’s fevered zombie brain still dreams of a one state solution, whereby a free Palestine will exist from the river to the sea, a dream that many of his non-zombie cohorts have yet to abandon. A dream that, for obvious reasons, is one of the main impediments to the achievement of actual statehood for the Palestinians… because I got news for you Zombie Arafat. We ain’t goin’ anywhere. And no! you cannot eat my brains.