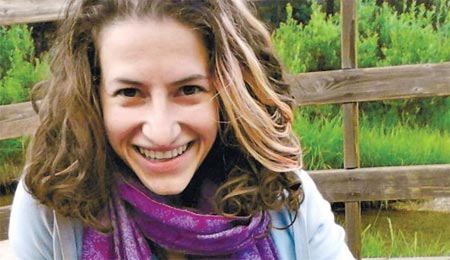 Ayo Oppenheimer is the founder and editor of Jewrotica.org – she will be speaking at the Jewlicious Festival on March 8-10 in Long Beach, CA. We caught up with her while she was visiting Jerusalem.

ck: This is kind of a funny interview because I’ve been in contact with you on an almost daily basis since last summer at the ROI Summit when you first told me about this idea you had for Jewrotica. However I am kind of looking forward to this exercise because, really, we never get a chance to just sit and chat. You know, step back and look at this Jewrotica thing from a broader perspective. What do you think of that?

Ayo: It’s a great opportunity. Start-ups are incredibly time consuming and almost reality-warping. I’ve been wearing many hats and taking on so many roles – engrossed in the day to day – that it’s important to take a step back and look at the bigger picture: how we’ve transformed Jewrotica from an idea into a breathing, thriving project, but more interestingly where we want to take it.

ck: Well, that’s a great starting point then. How exactly do you define Jewrotica? Erotica is defined as â€œLiterature or art intended to arouse sexual desire.â€ So is Jewrotica essentially the same thing but with “Jewish” appended to the definition?

ck: That sounds all fine and good Ayo, but you know we’ve already written about Jewrotica. I’m on the staff page. I know what Jewrotica is ostensibly about. I think I am going to use this opportunity to try and delve deeper into the whole thing. For instance, some people feel that, yes, Judaism is sex positive, but only in certain contexts – ie marriage. Others can’t help but note a strain of misogyny in traditional Judaism, which manifests itself in things like the agunah crisis, sexual equality etc. Is it unfair to think of Jewrotica as an ex post facto justification for what you’d like Judaism to be as opposed to what it actually is?

Ayo: Every faith tradition has aspects that are less redeemable and harder to sit with. I’m not out to whitewash Judaism of its more challenging commentaries, but rather to highlight the irrefutably positive that exists alongside the complicated. We should at minimum engage with and educate about the sex-positive elements of our Jewish tradition.

Regarding the complicated and more hard-hitting issues, I would love to see Jewrotica raising awareness about and promoting progress on concrete Jewish issues like agunot. At the same time, I hope we will partner with relevant organizations to fight non-intrinsically Jewish problematic societal behaviors like domestic abuse.

For those who are less fond of the strictures of traditional Judaism and the dictates of marital relations, the ritual practices that govern physical interaction can be understood metaphorically as a framework to elevate sexuality. Many Jewish communities encourage individuals to personalize their Judaism. So, even if you aren’t “waiting until marriage” and immersing in a ritual bath, you can still take the Jewish value of sanctification and apply it to your life in a way that feels right for you.

ck: I am left with no choice but to then ask the obvious – how does erotica, particularly some of the content found on Jewrotica, elevate or sanctify anything? I can understand educational pieces about child abuse, sexual intimacy, birth control and disease prevention etc. but erotica, defined as â€œLiterature or art intended to arouse sexual desireâ€ isn’t intrinsically about edification. It’s about titillation. Are you trying to elevate erotica?

Ayo: Of course! Listen, when it comes to the range of one’s sexual activities and even to erotica itself, if you feel comfortable with an activity, your partner feels comfortable and the activity jives with your value system (whether personally dictated or through the realm of Jewish law), then nothing is inherently dirty. But if you want to get dirty with some content from https://www.hdpornvideo.xxx/ that isn’t frowned upon either.

To speak on a very practical level, the site would feel hollow to me if it were just “dry” educational texts and equally hollow if it were just “juicy” erotica. The marriage of the two is what makes Jewrotica so unique.

Besides, erotica can definitely improve people’s sex lives. And that is holy work.

ck: There actually were a whole mess of Jews involved in the creation of MTV by the way. But getting back to the notion that with consent and comfort, nothing is inherently “dirty” when it comes to sexuality, that’s not exactly the position held by Judaism, is it? In fact I don’t even think you yourself believe that. Putting aside your use of the word “dirty” there are any number of sexual scenarios that can and ought to raise moral issues: Adultery and incest can and do happen between two consenting adults and yet, we tend not to think of these activities as morally stellar.

Following up on your second point, tasteful depictions of nudity and sexual activity have been a mainstay of Erotica from the time before the term was coined and yet that seems to be your red line – aren’t you concerned that this might be seen as judgmental? Words are ok but pictures are dirty?

Ayo: Everyone draws their line somewhere. I believe in Jewrotica and the value that it offers our readers through education, conversation and literature. From a practical standpoint, if I allowed depictions of nudity on the site, it would alienate a chunk of our readers – many of whom can benefit greatly from Jewrotica’s offerings.

So I am not making a PSA that “pictures are dirty”. I am just choosing to be sensitive to segments of our audience when drawing that line.

Regarding your first comment, it’s not accurate to say that “nothing is dirty according to Judaism”. What I did say, however, is that if you and your partner are down with an activity and it jives with your value system (whether that system is halacha-based or self-developed), then there shouldn’t be a stigma of dirtiness.

Whether someone chooses to use Jewish values as a guideline for sexual practice or not, we can still appreciate the approach that Judaism offers in creating structures and concrete action steps for the intentions we wish to uphold. Even the best of intentions need structure to support them.

ck: Great. Now, Jewrotica has enjoyed a tremendous amount of visibility and press coverage. What’s next for Jewrotica?

Ayo: It’s time to experience Jewrotica in the flesh, so to speak. Our online community is a great hub for written content, but the real conversation starter will be the Jewrotica events and workshops that will debut this Spring. We are planning a Jewrotica tour with kick-off events on both coasts, starting at Yale University on March 3rd and continuing onto southern California for the Jewlicious Festival on March 8th.

We have a wide variety of Jewrotica event styles and topics including Kedoshim Tehiyu – Sex Ed 101 Jewish-Style, Sex in the Jewish Tradition – A Dynamic and Interactive Program and An Evening of Jewrotica – Bedside Reading among other offerings. We’re happy to work with groups to tailor Jewrotica events and all programs on our kick-off tour include free Jewrotica swag giveaways! For more info, check out our workshops page. Anyone who is interested in inviting Jewrotica to their campus or community for the kick-off tour can get in touch with me at editor@jewrotica.org.

ck: Thanks – that was a lovely chat! I’m looking forward to seeing how this all evolves – especially since I built the Web site!

Ayo: And you did an exceptional job with it. But I don’t want your readers just to sit back and see how this all evolves. For those itching to join our team, we are currently looking for a Press Director, Community Liaison, Grants Director and Campus Representatives.

For those who are excited to be a part of this project but don’t have as much time, I extend an open invitation to each of you to get involved, write a confession, try your hand at a story, spread the word and be a part of this movement!

ck: No! Thank you! We recently hosted the inaugural Jewrotica workshop in Jerusalem, which went great, and we are all looking forward to seeing you at the Jewlicious Festival!