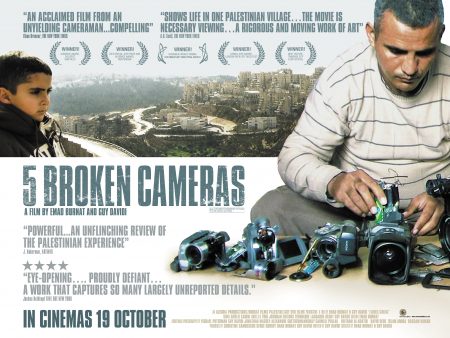 Flint Michigan’s favorite son, filmmaker Michael Moore, redeemed a captive at LAX this morning, when Palestinian filmmaker and Oscar nominee, Emad Burnat was held by immigration officials and allegedly threatened with being sent “back to Palestine.”

Emad Burnat, his wife and child, are visiting Los Angeles to attend the 85th Annual Academy Awards. His documentary, “5 Broken Cameras,” is nominated for an award. His wife already pruchased a new dress for the awards, and Burnat joked that he is looking forward to meeting J’Lo. His film follows the first few years of his daughters life in the West Bank village of Bil’in and their fight against Israel’s security wall. A winner at Sundance, “5 Broken Cameras” refers to the five cameras that were broken by soldiers in the Israeli army.

Stopped by U.S. immigration personnel at the airport, Burnat presented the authorities with his official Oscars invitation. When told it was not proper enough to enter the country (even though he had just been on a press tour on the East Coast earlier this month), Burnat reached out to Michael Moore.

Moore tweeted the unfolding incident to his followers and contacted the Academy. Their lawyers intervened and within ninety minutes, Burnat and his family were admitted into LaLaLand.

A trailer for the film can be found here.