Jewlicious Book of the Week: Herring Today. Not Gone Tomorrow 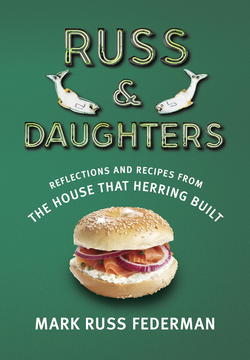 Before we talk about the book, let’s talk about me – just as if we are schmoozing in a long line at an appetizing store’s counter on the Lower East Side. I am not a Litvak. Well, perhaps I am a half-Litvak, but still, I never ate whitefish or lox until I was at least twenty. And I still have never eaten herring – not even a taste in a Russ & Daughters’ line. Yet, I must tell you, I loved this book and it is easily the second best read I have had year to date.

In this book, the author, Mark Russ Federman, the grandson of the founder of Russ & Daughters, Joel Russ, recounts stories from Manhattan’s Lower East Side, the founding of his family’s cut-rate herring and appetizing store, life in a four-generation family business, and glimpses into the Jewish style of retail customer service. And for good measure, he throws in several recipes.

Russ & Daughters: Reflections and Recipes from the House That Herring Built by Mark Russ Federman (Schocken/Random House, March 5, 2013) opens with a foreword by Calvin Trillin, the famed essayist, author, and humorist. One of Trillin’s novels, Tepper Isn’t Going Out was partially set in a parking space in front of Russ & Daughters’ store on East Houston Street. 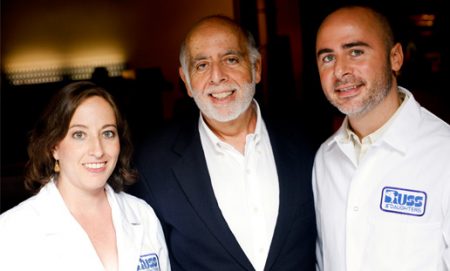 The author with the 4th generation, his daughter and nephew.

Trillen’s foreword alone is worth the book’s purchase price. He recounts how he would shop for lox, bagels, and smoked fish with his daughters as they were growing up. Sure, perhaps he could find fish for a lower price, but where else would one of the Russ daughters drop everything to kvell over the beauty of his kids? Like eating at the now defunct Ratner’s or Garden dairy restaurants, you came as much for the experience as the food.

Joel Russ (pronounced Rooos originally but who’s going to argue with a customer; just say Russ) arrived on Manhattan’s Lower East Side from the Galitzianer area of Southeastern Poland and started to peddle herring from a barrel shortly after his arrival in America. Like many other peddlers, he worked his way up from peddling, pushcart, storefront, store, and building ownership. Putting family members to work, and his lovely three daughters (who were much better suited to customer service), helped the business prosper. And for that reason the store became idiosyncratic and famous as a “& DAUGHTERS”, while everyone else was “& SONS.” They say the Joel Russ only gave approval to his daughter’s choices of husbands based on whether the men could work in the store and carry the heavy herring barrels from the back of the store to the front. 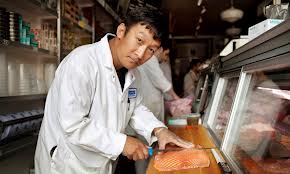 For the reader, Federman recreates the world of sawdust covered stores and the transition to linoleum; the demolition of the elevated trains; the postwar flight of the middle class from the Lower East Side to the suburbs; the decline of the area into a place filled with crime, poverty, drugs, and prostitution; and its current regeneration or gentrification of the area into a hipster haven of pricey apartments, boutiques, bars, and shops.

Anecdotes abound, as do lessons in service and management, and managing the managers. Over 30 years ago, Federman joined the business and purchased it from his family and aunts after years as a prosecutor, litigator, and even a tour of duty as a army captain in Vietnam. His nephew and daughter have since purchased the business from him after their stints in engineering, business, and other endeavors. 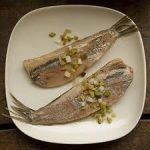 A herring used to be good for two meals. For the first meal you rubbed the herring on your piece of bread. For the second meal, you ate the herring. For a few month, the author experimented with a dozen types of herrings in sauces (curry?), but customers feigned interest and stuck with the classic styles

The book is true to its title. Federman has had time to reflect on the business instead of just to react to vendors, staff, and customers. The most important lessons I learned from the book are not to lose your focus thinking of a smart retort when slicing fish, or you can end up with a scar on your hand; it doesn’t matter if it was Joel Russ’ idea or his neighbor’s suggestion to bring his daughters into the biz, no there is room for mulitple truths; never hire a shomer shabbos brother (Uncle Shmemendel) if he is going to convince customers to shop elsewhere; never accuse a nephew of stealing if you simply misplaced the day’s receipts (but the nephew ended up making so many times more in his own auto related business after he left); what is the difference between deli and appetizing; if you are going to visit the Strzyzover Rebbe, you should wear a kippah; if grandpa’s idea of customer service to say â€œRebbitzen, tog mire a toyveh, fahrlir mein ahdres (lady, do me a favor, lose my addressâ€), then bring some charming females into the business who can schmooze the customers; never grant special favors to any customers, unless they are top doctors; if a customer tells you to set your daughter up with the â€œSheik of Brooklynâ€, do it; Jose (Yussel) Reyes, Herman (Chaim) Vargas, and a Sherpa can be great slicers and managers; use Swedish mustard when making a beet, apple, and herring salad; and if you bring the fourth generation into the business, they are going to have great ideas for “herring pairings,” websites, and marketing. 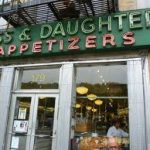 I recommend this book to any foodie or lox eater, anyone who grew up in a family business or ate a pickle or a herring from a barrel, and anyone who needs to read a good anecdote or misses standing in line with a tough, picky customer who imagines all salespeople and store owners to be gonnifs.

Note: Larry edits MyJewishBooks.com in the evenings. He rarely eats lox, and never ate a herring. He shops periodically at Russ & Daughters on the way home from TheRoastingPlant.com or Chinatown, but only gets horseradish-cream-cheese or the baked-salmon-with-whitefish salad

A video with the owners: