8 Comments
by wendy in furs
233 Views 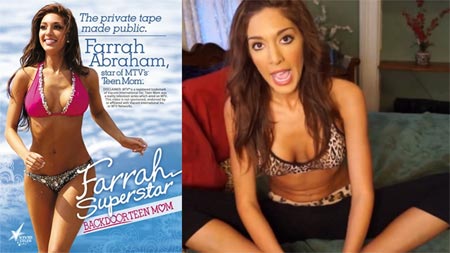 Back in the day, Farrah Abraham was a nice Christian high school girl from Council Bluffs, Iowa. Like any 16 year old, she had hopes and aspirations – her plan was to go into modeling after graduation. All those dreams came crashing down when she found herself pregnant. And it got even better when the baby’s father Derek Underwood died in a tragic car crash two months before she gave birth. So much drama right? Just perfect for the voyeuristic shlockmeisters at MTV Networks who found a perfect cast member for their new “Reality” show – 16 and Pregnant – which followed the stories of pregnant teenage girls in high school dealing with the hardships of teenage pregnancy. Duh. That appearance provided Farrah with her next gig, another MTV waste of life titled Teen Mom – which followed the lives of Farrah and three other girls from the first season of 16 and Pregnant as they navigated their first years of motherhood.

After spending so much time in the spotlight – Teen Mom regularly pulled upward of 3-5 million viewers an episode – Farrah’s life and career took a standard trajectory – She tried to pitch her own spin-off reality series to follow her journey after culinary school as an aspiring chef, but the show never really made it to production. Farrah also launched her own brand of pasta sauce called Mom & Me Premium Italian Hot Pepper Sauce, wrote a book My Teenage Dream Ended and released several music singles. etc. But I guess it still wasn’t enough. Still missing from her life was that special someone, a partner who could keep up with the successful single parent media machine that was Farrah. So what’s a girl to do? Go on JDate of course, where one can find successful single men of the mosaic persuasion known to take good care of their women. Her JDate profile read:

I’m looking for a man to be my partner in crime, who is successful like me, and has style. If you can give a woman everything she deserves and you want the same in exchange, message me. You won’t regret it. I’m looking for a man that is top of the line; I guess I’m picky. I want a man who is happy, supportive, works hard, is successful, can stay in but can also go out, is active, outgoing, easygoing, likes children and dogs, can be serious, but knows when to have fun and is a romantic.

This was reported in September of 2011. By early December of that year, Farrah had snagged herself a handsome and well to do Jewish man 14 years her senior – 34 year old Marcel Kaminstein, a jewelry entrepreneur. Things were looking good, initial reports were rosy and Kaminstein was getting along well with Farrah’s daughter. So now we know the secret to success on JDate! Be an ambitious 20 year old hot single Mom willing to date an older man! Lack of Jewishness not a problem, fatties needn’t apply.

Sadly by New years, 2012 the relationship had gone south and Kaminstein and Abraham had called it quits – amicably. Now what!? There were a couple of options on the table – but none had the potential for fame that she enjoyed during Teen Mom. Until Farrah met another Jewish man, one James Deen, an adult video entertainer who had starred in over 1,300 porn flicks. Did she meet the HEEB 100 member on JDate? We don’t know. Did they really date or was he merely a hired gun for Farrah’s next publicity stunt? Well, that relationship did not last long either amid allegations that Deen mistreated Farrah and had a small wiener. Yes that relationship ended acrimoniously but not before Deen and Farrah filmed a sex tape. Farrah claimed she shot the professionally produced tape as a keepsake – like a wedding video – for her own use: “I wanted my own personal video made and photos taken for myself, when I am older I will have my best year to look back on. I’m happy to see my 21st year be done. I’ve learned a lot.”

Then Farrah claimed that the tape had been leaked and that she had no choice but to start shopping it around. She finally made a deal with adult film juggernaut Vivid Videos. The movie, “Farrah Superstar: Backdoor Teen Mom,” will be released in mid May and Farrah got nearly $1 million for the rights. Just to be clear, the “backdoor” reference does not refer to an actual door. And also the whole lost sex tape thing was a ruse. Deen’s mistreatment was merely him spilling the beans on the whole “story” because he claimed he cannot lie. The plan was always to release the sex tape as a play for further fame and fortune à la Kim Kardashian. Shocker. The sex tape can now be viewed all over the internet, just like the Kardashian tape.

And what have we learned from all of this boys and girls? If you can’t find ultimate happiness on JDate, like so many others before you, uhm, you can always release a sex tape. Also everything about this post is total and complete trash. I’m sorry. But that’s just life in the big city. Best of luck to Farrah and her daughter. As for James Deen, he is costarring with Lindsay Lohan in the upcoming film “The Canyons” directed by Paul Schrader and written by Brett Easton-Ellis.