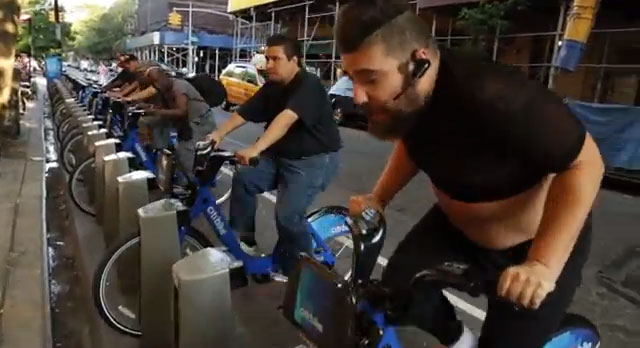 Some Jews get Tikkun Olam – you know that over hyped concept in Judaism whereby any good thing you do in the world can be attributed to a Jewish precept so that you can feel better about yourself for not fasting on Yom Kippur – while others don’t. OK, maybe I was kidding about Tikkun Olam being over hyped. Please don’t cry every Jewish Communal Professional and guitar toting Reform Rabbi reading this. Anyhow…

Fabrizio Goldstein, aka FatJew is a humanitarian at heart.

CitiBikes invaded New York recently to much fanfare and controversy. The little known fact about them however, is that when docked and not in use, the wheels still spin. So now people are holding SoulCycle classes for homeless people. Because those who can’t afford Soul Cycle or FlyWheel (one class usually costs about $35) should also be able to have gorgeous bodies.

Granted, those homeless people using CitiBikes to get “sick bodies” have to pedal backward, but that is a small price to pay for “gorgeous definition.” Thanks Fat Jew!

So far so good right?

Now these bike racks have been somewhat controversial in New York. Activists tried and failed to move a 40-bike rack on Liberty Street and Broadway because the station took up a spot that used to be occupied by 5 Food carts. On the Lower East Side, residents delivered a 1,000+ name petition in the hopes of getting a bike station moved from right in front of Frank’s Bike Shop, a Grand Street business that uh… rents bikes to tourists. No luck though and the station is still there but there’s no telling how long Frank will last.

Small businessmen and immigrant food vendors should take a lesson from the rich – hire an expensive lawyer! When media mogul and MOT Barry Diller wanted a bike station moved from in front his Chelsea corporate headquarters, in part because the rack would interfere with star-studded soirees held in the foyer of his building, all it took was a phone call or two from a shnazzy lawyer to the Department of Transport. Now how will the homeless of Chelsea and Spring Street and Mid-Town (other locations where bike stations have been removed) get buff? Doesn’t anybody care about Tikkun Olam?