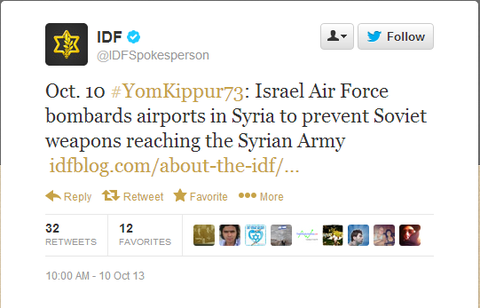 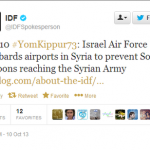 On Thursday, as the world was reading about Alice Munro, the recipient of the 2013 Nobel Prize for Literature, the IDF SpokesModel (perhaps mad that Philip Roth was not the prize winner) tweeted that the Israel Defense Forces had bombarded airports in Syria to prevent weapons from reaching Syria.

This tweet caused oil prices to increase $1.40 a barrel and brought some hefty profits to some (they should contribute a portion of their gains to the Friends of the IDF). The price opened at $101.61 a barrel before closing at $103.01.

The tweet was true, but 40 years late. The tweet referred to the action during the Yom Kippur War of October 1973 #YomKippur73