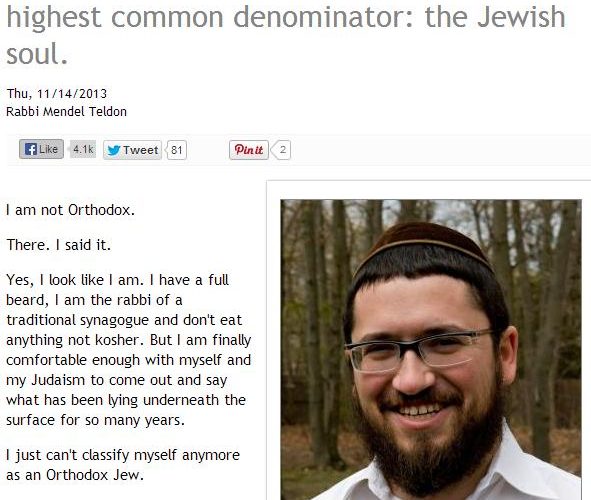 Less than a week ago, an opinion piece appeared on the Jewish Week’s website that I’ve seen that has been shared at least a dozen times on friends’ Facebook pages but often without a critical eye towards it.  When I saw that it was written by a Chabad rabbi, Rabbi Mendel Teldon, I initially thought “I Am Not Orthodox” would be about one of two possibilities.  Either he was writing in to say that he realized that he’s “Orthoprax” and not Orthodox and that what is ultimately important is performance of mizvot, since – in Chabad philosophy – they bring light into this world and that’s what’s really important – not beliefs.  Or, it could be that with the so-called “Orthodox Wars” (as The Jewish Week has dubbed it) and some Orthodox rabbis claiming that other Orthodox rabbis are not actually Orthodox, Rabbi Teldon realizes that he might be one of those excluded from being within the Orthodox camp.  Beginning with “I am finally comfortable enough with myself and my Judaism to come out and say what has been lying underneath the surface for so many years.  I just can’t classify myself anymore as an Orthodox Jew”, it really wasn’t clear which way he was going to go.

When I actually did read it, I realized he not only was not making such claims about those affiliations and labels, but actually advocating for getting rid of denominational labels altogether: “I am not Orthodox since there is no such thing as an Orthodox Jew. As there is no such thing as a Reform Jew or Conservative Jew.”  He continues by saying that such labels are “artificial lines dividing Jews into classes and sub-classes”.  Now, Rabbi Teldon has been serving as a rabbi in Long Island for over nine years and should know that there is a difference, in his experience as a Jewish leader, between the denominations and their labels.

However, Rabbi Teldon is spot-on when he claims that “what recent surveys cry out is that people are Post-Denominational. They are tired of being boxed into these silly categories. The overwhelming majority of people don’t even know what they mean.”  This is something I have found to be very true in my work with young adult Jews and I imagine others who work in the Jewish community also find to be true.

However, it sounds strange that not only is a Hassidic Jew trying to do away with labels, but a Lubavitcher Hassidic Jew is trying to say that they artificial.  Rabbi Teldon claims that “these labels are more about tearing us apart than furthering Judaism” – if so, then just be a Jew and not a particularly-labeled Hassidic Jew….

But, what’s more problematic is that if Rabbi Teldon wants to claim that any Jew – Reform, Reconstructionist, Conservative, Renewal, etc. – is a Jew and it doesn’t matter the artificial labels attached, then, according to him, even Jews who converted from those movements would be still a Jew.  Or, even a Reform Jew whose father is a Jew and mother is a gentile, would still be considered a Jew. I would be surprised if Rabbi Teldon admitted this, though, which creates a problem in his claim that these labels are merely artificial and don’t mean anything.

Rabbi Teldon claims that “when we are able to focus on the fact that while we have differences but a family truly remains connected eternally, it will reconfirm what we already knew: Am Yisroel Chai!”, I think that’s a beautiful sentiment, but I don’t know if Rabbi Teldon would include everybody from that family….  I just think that he should be honest with himself about considering any Jew, regardless of denominational labels, as such.