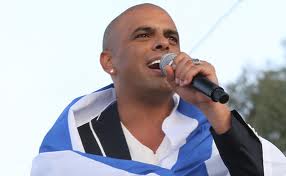 I can finally tell you freely what I could not yesterday: Eyal Golan, a famous Israeli singer, is under investigation by the Israeli police for statutory rape.

There I said it. What a relief.

Until today, due to a court order, it was illegal for the Israeli press to publicly reveal the name of the accused. This order apparently also applied to the Internet and web blogs, where his name was mentioned. That means that I would have been charged with a crime for revealing this fact on line before today. Unless, of course, I said so on Facebook or other social media which were apparently exempted from the court order. But today Eyal Golan himself gave us all permission to speak his name in any venue.

Those of you who do not live in Israel have been spared the absurd spectacle which has been played out on all three of Israel’s broadcast networks’ evening news programs for the past week. Even though they could not tell us his name, every channel led with a story on the case. The five o’clock news shows did this as well. They all referred to Golan as the “famous singer” charged with a crime. They did this while showing various pictures of Eyal Golan with his face in some way covered or digitally altered.

The news channels did not fool anyone. It was obvious who the person in the pictures was. Also, everyone in the country knew it once his name was revealed on line.

The news programs also gave us such detailed information about the singer and his various performances that it did not take Sherlock Homes to figure out who they were talking about. In the most absurd example of this, on last night’s (Tuesday) Channel Ten news they stated that the “famous singer” had performed at a special Bat Mitzvah ceremony the night before at the Binyamei Haumah convention center in Jerusalem.

For those of you who live outside of Israel I will attempt to put this into perspective. Please follow the following analogy carefully. It may be difficult for you to know who I am talking about:

A famous American male singer whose name cannot be revealed is under investigation for having sex with minors.

He has one of the best selling albums of all time.

His sister is also a famous singer.

Pictures of him are shown on the news with his face covered, but you can clearly see that he is wearing a glove on only one hand.

He has had a lot of plastic surgery.

O.K. then how about this one:

A famous American baseball player whose name cannot be revealed is under investigation for using performance enhancing drugs.

He is a former MVP.

He used to play for the Texas Rangers and Seattle Mariners.

He plays third base for the Yankees.

No, these were not exaggerations!