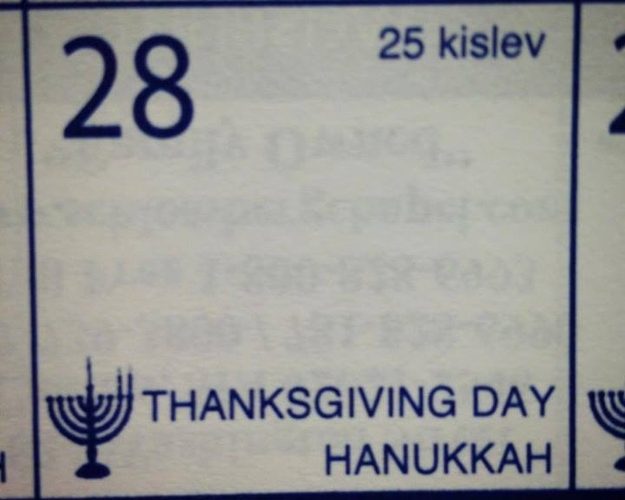 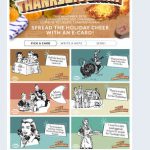 Heeb is already post-Thanksgivukah and senses it is overplayed. Other media are using the coincidental dates to generate interest and revenue. And most readers are not paying attention. But for those who care, and want to celebrate two holidays, here is a quick primer and some ideas.

In the United States, Thanksgiving Day is an annual holiday that pays homage to the Puritans and Calvinists of the 17th Century Massachusetts Bay Colony who had Days of Thanksgiving and also a memorable meal between the English colonists and the aboriginal native residents of their region. In 1863, it was made a national holiday with a set date across all states – both Union and Confederate – by President Abraham Lincoln. If Puritans and Indians could get along in national myth, couldn’t the North and South? Presently, the late November holiday is marked by family gatherings, a meal, customary foods, sporting events, and late night holiday shopping. The reformist Christians of Massachusetts, who arrived in the colonies to pursue religious freedom, used the holiday to celebrate the final harvest or other provident events.

In the United States, Jewish families presently celebrate Hanukkah – a celebration of Hasmoneanism, national liberation, religious freedom, and a miracle – by reciting special prayers, kindling a hanukkiah, exchanging gifts, and having at least one family gathering with special holiday foods. 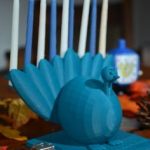 The Menurkey, design by a pre-teen who raised $45,000 on kickstarter to make it and sell it at the NY Jewish Museum

Both holidays also have their dark sides: how colonists later treated their native american neighbors, and how Hasmoneans treated their Jewish neighbors who enjoyed Hellenism. Like I mentioned above, if in myth the Pilgrims and tribes were friends, and North and South, could religious and secular, and Maccabees and Hellenists break challah together?

The last time both holidays coincided was 1888, the same year Manischewitz Inc. was founded. Manischewitz the largest kosher food company in the United States, will reportedly spend over $2.5 million on its “ThanksgivuKah” campaign. They can’t call it ThanksgivuKKah, because according to some, Dana Gitell, a resident of the Commonwealth of Massachusetts, trademarked the double “KK” spelling of the word in 2012.

Avital Pessar, brand manager at Manischewitz, said their NJ-based firm is asking its fans to celebrate “Thanksgivukah” using a website, Facebook, Instagram, Pinterest, Thanksgivukah dreidels, e-cards, a free app, Twitter, and a $1000 recipe contest. They are promoting Manischewitz broth – and its newly launched turkey broth – as “the official broth of Thanksgivukah.”

In this video, a turkey and a dredel battle it out: 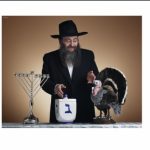 Rabbi Anchelle Perl of Chabad of Mineola, Long Island, NY has granted a pardon to a kosher turkey, just as the U.S. President does.

The New York Times asked a Jewish couple, one of Midwestern-BBQ heritage and one of Sicilian and Italian parentage to discuss their fusion. David Firestone and Susan Brenna come up with recipes – with the help of Melissa Clark – for sweet and sour braised brisket with cranberries and pomegranate, served with latkes topped with Portuguese pumpkin preserves; and Horseradish matzo ball soup. They considered a Plymouth Rock-Maccabee combo of pumpkin filled Hanukkah sufganiyot, but Melissa convinced them to use the pumpkin preserves on the latkes. 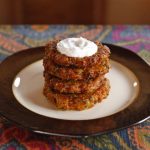 TheShiksa.com uses Maischewitz matzo meal to make her curry vegetable latkes. Instead of potatoes, she used shredded zucchini and carrots. She added curry, allspice, cumin and cayenne with matzo meal and potato starch.

The CupcakeProject.com asked other food bloggers for their recipes, and they came up with: 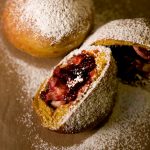 Time Out Chicago is listed ten events to celebrate Thanksgivukah. One even serves kugel with turkey and BACON. Oh Joy! I thought that Mayor Ram Emanuel changed all that.

JewishBoston has made a video with the city’s mayor and created a website at for the sole purpose of celebrating Thanksgiving and Hanukkah. Their site includes FOUR QUESTIONS for a Jewish Pilgrim, or at least for Ms. Malka Benjamin, a Pilgrim re-enactor at Plimouth Plantation.

In Los Angeles, Deborah Gitell (sister of the Gitell trademarker mentioned above) of Hollywood and Craig Taubman of the Pico Union Project are teaming up to organize a Thanksgivukkah Festival on Nov. 29 at the The Pico Union Project. The event will celebrate the rare convergence of the Hebrew and Gregorian calendars resulting in the first day of Hanukkah falling on Thanksgiving Day. The event will include IKAR, Moshav Band, Ari Herstand, Aqua Marina Mariachi, Moose Band, the Keshet Chaim Dance Ensemble, the Beit T’Shuvah Choir, and Kosha Dillz.

So. celebrate while you have the chance. According to a calculation by physicist Jonathan Mizrahi, who works at Sandia National Laboratories in New Mexico, this intersection will not happen again for more than 77,000 years in 79811. However, an intersection of erev Hanukkah and Thanksgiving Day will be in 2070.