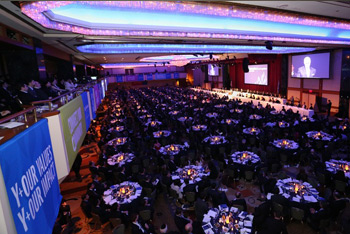 It is a night of Wall Street lore. Each Hanukkah in recent memory, the older leaders and the younger workers of Wall Street occupy the New York Hilton in midtown Manhattan for a night of awards, desserts, and fundraising. For decades, Ace Greenberg of the now defunct Bear Stearns would “call cards.” In front of over a thousand, he would announce the size of his annual gift to the UJA, and then he would ask other titans of the financial community how much they would be pledging and donating. The gifts were usually in the millions, and this only represented their gifts to the UJA, and not their other philanthropies.

On Monday evening, the Wall Street Division honored Lloyd C. Blankfein of The Goldman Sachs Group, Inc. with its Gustave L. Levy Award, and David K. Wassong of Soros Fund Management LLC with The Wall Street Young Leadership Award. 1700 donors and guests were present, which was a record high for attendance; and $26 million in pledges and contributions were recorded.

Cardinal Timothy M. Dolan, archbishop of New York, popped by the festivities and said, “We can work together against the common enemy of hunger and homelessness.” The keynote speaker was New York Police Department Commissioner Raymond Kelly (probably soon to join an investment bank in 2014). He received a mounted shofar as a gift; many in attendance had their chauffeurs downstairs.

Blankfein was welcomed to his second bar mitzvah by Wassong, who added, ‘but this time, the money goes to the UJA.’ Blankfein reinforced that 20% of the NYC Jewish community lives in poverty, and that as a youth, as the son of a postal worker, he attended the Hebrew Educational Society, attended Jewish summer camps, and went to YM-YWHAs, all of which were supported through communal charity.”

Wassong, who received his award from Robert Soros, told the story of his father, who was born in Warsaw in 1930, but escaped with his family to Palestine in 1939. Wassong, who growing up had more Muslim best friends than others, said his interest in Jewish identity were reawakened after a UJA-Federation Wall Street & Financial Services Division mission to Israel in 2011.

The attendees gave a standing ovation to Alan C. “Ace” Greenberg, now retired, who was in attendence at the dinner… although he was not in the room during the ovation (at 86, you sometimes have to skip out and take care of business)