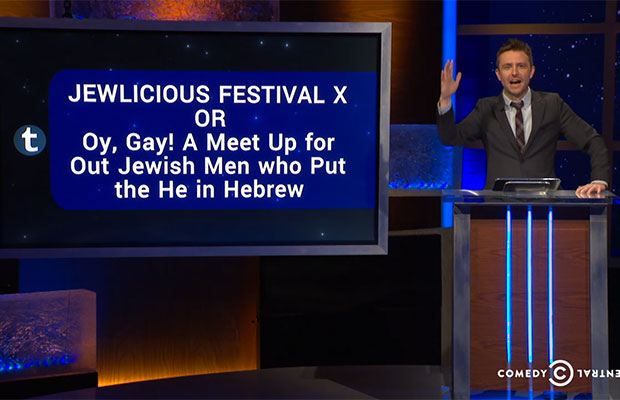 Last night’s episode of @Midnight on Comedy Central was very Jewlicious. Very Jewlicious indeed! For those of you who don’t know. @midnight is a show where “Chris Hardwick leads three celebrity contestants down the ultimate Internet wormhole. Culling from the darkest recesses of social media, they compete to determine who has the funniest take on the day’s pop culture.” On the episode that aired on Thursday, March 27, the celebrity contestants were Megan Neuringer, Ben Kronberg and Greg Proops. Megan Neuringer is a writer and actress, who is, at least for me, best known for her appearance in an episode of The Morning After in a clip titled The pearl Necklace – a classic dissection of dumb guy sexual psychology. Also her name sounds Jewish. Ben Kronberg is a writer, actor and stand-up comic who also has a Jewish sounding name. And finally Greg Proops is an American actor, stand-up comedian and television host. He is widely known for his work as an improvisational comedian on the UK and U.S. versions of Whose Line Is It Anyway? Definitely not a Jew. Not that there’s anything wrong with that.

The show continued with a segment titled “Event or Invented” and the comedians had to choose which of the two events were real – Jewlicious Festival X or Oy Gay! A Meet Up for Out Jewish Men who put the He in Hebrew.” Greg Proops (the goy) buzzed in first and guessed Oy Gay. Duh, Of course HE would get it wrong. Proops asked what happens at Jewlicious Festival X, the host took a dig at Festival Director Rabbi Yonah and said that it’s an event that uses “waaay too many hashtags” 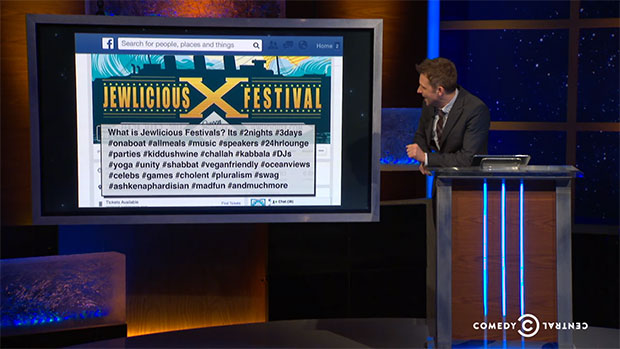 Proops attempted a lame line “I must have forgotten to blow out my menorah because when I woke up I was covered in beeyotches” and Hardwick gave him points anyway. Why is that even funny? Kronberg however made up for that lame retort with his own comment “What circumcise is that font?” and thus winning well deserved points! However, it didn’t help either because ultimately Megan Neuringer emerged victorious! You can see the entire episode on Comedy Central’s Web Site.

So we didn’t save any maidens in distress, but I am pretty sure that, at least this week – Jewlicious wins the Internets!