Yom HaShoah Holocaust Remembrance Day 2014 from the Shuk in Jerusalem 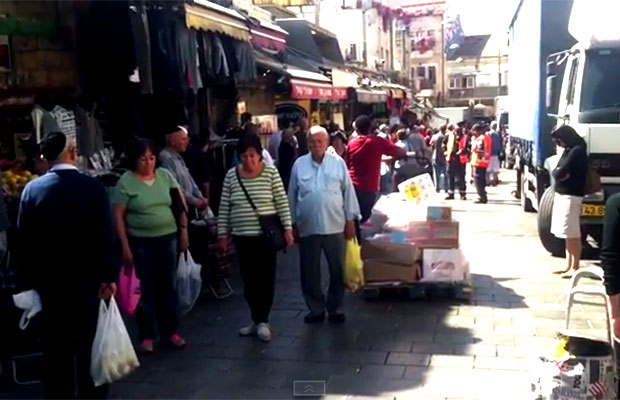 This video was shot today at the Mahane Yehuda Market in Jerusalem. Holocaust Remembrance Day began last night in Israel. All the flags are at half mast and last night there was a ceremony at Yad Vashem, the Holocaust Museum, attended by most of the country’s leadership. Israeli Prime Minister Benjamin Netanyahu focused on the Iranian Nuclear threat:

Today we are facing real threats and immediate dangers … I call on the world power to insist that Iran completely give up its abilities to make nuclear weapons … In contrast to our situation in the Holocaust today we have a tremendous power to protect ourselves … Israel is stronger than ever … On behalf of the Jewish people, I say to those who have sought and still seek to destroy us: You have failed and you will fail.

Israeli President Shimon Peres warned against the resurgence of Nazism in Europe and the importance of peace:

We must not ignore any occurrence of anti-Semitism, any desecration of a synagogue, any tomb stone smashed in a cemetery in which our families are buried … We must not ignore the rise of extreme right wing parties with neo-Nazi tendencies who are a danger to each of us and a threat to every nation … A strong Israel is our response to the horrors of anti-Semitism but it does not excuse the rest of the world from its responsibility to prevent this disease from returning to their own homes … We are strong enough to repel dangers, we should not be scared of threats and we must not give up on peace.

Say what you will about Peres, but his message resonated more with me than Netanyahu’s did. I think the main lesson of the Holocaust, at least for me, was that fear is what led so many to Jews to passively accept their fate. The Warsaw Ghetto Uprising, as well as innumerable acts of resistance, demonstrated that we could take action against the Nazi death machine and strike a blow against the enemy. As Franklin D. Roosevelt once famously opined in his 1933 inaugural address “…the only thing we have to fear is fear itself.” I refuse to cower before the Iranians with their joke airforce, Republican Guards and empty threats, whose greatest victories are against unarmed civilians in Buenos Aries, Lebanon and Syria. I refuse to be afraid of Hamas who demonstrate complete impotence on a daily basis against Israel and its civilians. I refuse to express fear at Palestinian and Arab Israeli expressions of Nakba, knowing full well that they brought it upon themselves and the only Nakba is their continuous refusal to live in peace with Jews that aren’t going anywhere because they have nowhere else to go.

So the Palestine Authority and Hamas want to unite. OK so Hamas is branded a terrorist organization around the world but at least it means elections within 5-months and the world will know once and for all if the Palestinians want to choose a life of peace or the constant pain and suffering that warfare with Israel is going to inevitably mean, for them and for their families and future generations. Ok so the world is choosing to relax sanctions against Iran in the hopes of a diplomatic solution to the threat posed by nuclear armed Mullahs. I hope Iran’s leaders will chose a course of action that is beneficial to their people because the other choice, war with the Jews, will lead to unspeakable horror for the people of Iran. Remember what Kinky Friedman said “No, they ain’t makin’ jews like jesus anymore, They don’t turn the other cheek the way they done before.” and we ain’t gonna walk silently into those gas chambers again.

I trust you will have a thoughtful Holocaust Memorial Day.