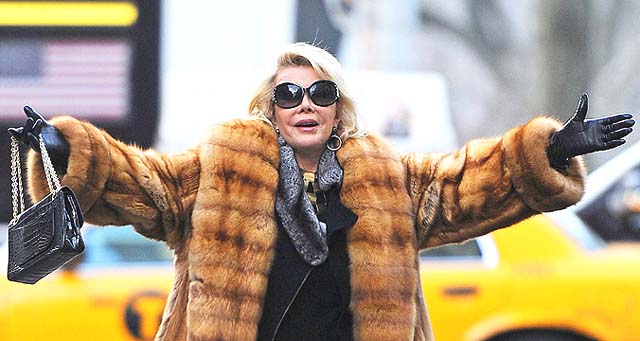 As the mourning continues for Joan Rivers, her will was filed in Manhattan’s Surrogate’s Court this week, and her daughter Melissa was named the estate’s executor. The estate’s value is estimated to be $150 Million.

Homes, apparel, and most of the tangible property were assigned to Melissa Rivers. Bequeaths were made to River’s daughter, grandson, sister, close assistants, publicist, and the late star’s niece Caroline Waxler and nephew, Andrew Waxler.

Funds – though not publicly specified- will be donated to several charities, including Manhattan’s Jewish Guild for the Blind, the Jewish Home and Hospital Foundation, and the AIDS service organization/food provider God’s Love We Deliver, where Rivers served as a board member. Guide Dogs for the Blind in California, the Cystic Fibrosis Foundation and the Simon Wiesenthal Center in Los Angeles are also recipients. The will made provisions for the care of her dogs as well. She had once stated that one of her dogs saved her life after her husband Edgar’s death.

A copy of the first pages of the will can be seen HERE.

A striking paragraph in the will is one that contains information on River’s domicile. It states that she is a RESIDENT of State of New York, but her DOMICILE is California where she will “reside indefinitely on a permanent basis.” New York has an estate tax of about 16% on high worth estates, while California does not (the Golden State ended its estate tax in 2005). New York, however, on uncontested wills, has any easier probate process for large estates. Rivers’ estate will be subject to New York state estate laws and taxes.

If you would like to learn more about what it means when an estate is in probate, head to dicksonlegal.com.

According to Charles Douglas, editor of the Journal of Estate and Tax Planning, State tax authorities look at vehicle registrations, driver’s licenses, voting histories, and the individual’s “intent” in determining the accurate domicile. Having one’s residence and domicile in different states raises a flag for tax authorities.