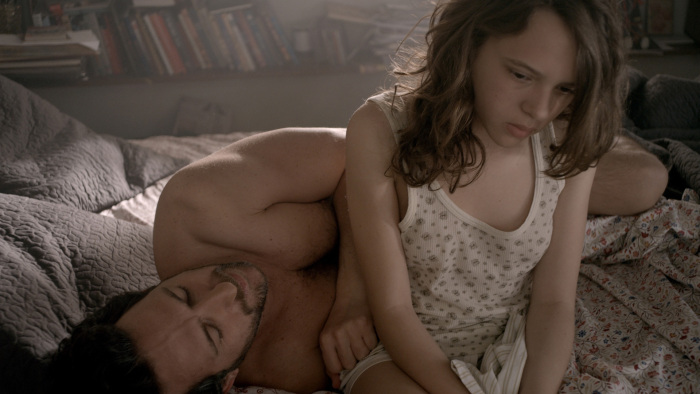 The 15th Hong Kong Jewish Film Festival had the theme of “courage” this year. So many of their films had a spirit of heroism and bravery?, and perhaps a wink to the “Occupy Central” events that were occurring blocks away.

The Opening Night film was 24 DAYS (24 Jours: La vérité sur l’affaire Ilan Halimi). Directed by Alexandre Arcady the 2014 French film was inspired by a real-life incident, a nearly month-long kidnapping and torture of 23-year-old Ilan Halimi, whose traumatic ordeal at the hands of the “Gang of Barbarians” prompted a massive police manhunt and, eventually, a national outcry against anti-Semitism in France. Based on the book by Ilan’s mother Ruth (who attended the Hong Kong screening), Arcady’s film follows the police as they try to keep one step ahead of the kidnappers. The film boasts a top-notch French cast that includes Pascal Elbé (The Other Son), Zabou Breitman (Almost Peaceful), Jacques Gamblin (The Names of Love) and Sylvie Testud (Fear and Trembling). The film was deemed so important that the French Ministry of Education has decided it must be shown in schools.

The HKJFF also screened “Above and Beyond: The Birth of the Israeli Air Force” by Roberta Grossman, which was discussed in a prior Jewlicious posting, about the founding of the Israeli Air Force in 1948; “Anywhere Else” (Anderswo), Directed by Ester Amrami, and Israeli comedy that debuted at the Berlin Film Festival 2014 about a young Israeli woman figuring out where and with whom she feels most at home, starring Neta Riskin (Shtisel), as Noa, who is torn between her gorgeous German boyfriend and her crazy Israeli mother; and ARABANI, Directed by Adi Adwan, and Israeli drama that won at the 2014 Jerusalem International Film Festival, about a closed and deeply conservative Druze community that is scandalized by the return of one of its native sons in Arabani, who is newly divorced from his Jewish wife, with his two unruly teenage kids in tow. The community turn on him and his kids, as they start new relationships and romances with the locals

The festival also featured the Israeli musical comedy Cupcakes, directed by Eytan Fox | about a heartbroken Tel Aviv baker Anat, who along with her friends represent Israel at a Eurovision-style song contest. And G-d’s Slave, directed by Joel Novoa Schneider. In this Venezuela, Argentina, Uruguay, American thriller Venezuelan director Joel Novoa Schneider draws compelling performances from his two troubled protagonists: one a ‘sleeper’ terrorist, activated to carry out a deadly mission and the other, a Mossad agent, desperate to avoid past mistakes and prevent tragedy.

The Sundance Film Festival 2015 will be held from January 22, 2015 to February 1, 2015, overlapping with Shabbat Shirah and ending write before Tu b’shvat:

The World Dramatic Competition will include:

“PRINCESS” (Israel) Directed and written by Tali Shalom Ezer — While her mother is away from home, 12-year-old Adar’s role-playing games with her stepfather move into dangerous territory. Seeking an escape, Adar finds Alan, an ethereal boy that accompanies her on a dark journey between reality and fantasy. Cast: Keren Mor, Shira Haas, Ori Pfeffer, Adar Zohar Hanetz. International Premiere.

The U.S. Dramatic Competition will include

“The D Train” (USA), is directed and written by Jarrad Paul and Andrew Mogel. With his 20th reunion looming, Dan can’t shake his high school insecurities. In a misguided mission to prove he’s changed, Dan rekindles a friendship with the popular guy from his class and is left scrambling to protect more than just his reputation when a wild night takes an unexpected turn. Cast: Jack Black, James Marsden, Kathryn Hahn, Jeffrey Tambor, Mike White, Kyle Bornheimer.

“The Diary of a Teenage Girl” (USA). Written and directed by Marielle Heller — Minnie Goetze is a 15-year-old aspiring comic-book artist, coming of age in the haze of the 1970s in San Francisco. Insatiably curious about the world around her, Minnie is a pretty typical teenage girl. Oh, except that she’s sleeping with her mother’s boyfriend. Based on the novel by Phoebe Gloeckner. Cast: Bel Powley, Alexander Skarsgård, Christopher Meloni, Kristen Wiig.

“I Smile Back” (USA) Directed by Adam Salky; Written by Amy Koppelman and Paige Dylan — All is not right in suburbia. Laney Brooks, a wife and mother on the edge, has stopped taking her meds, substituting recreational drugs and the wrong men. With the destruction of her family looming, Laney makes a last, desperate attempt at redemption. Cast: Sarah Silverman, Josh Charles, Thomas Sadoski, Mia Barron, Terry Kinney, Chris Sarandon.

U.S. Documentary Competition will include

“Best of Enemies” (USA) Directed by Morgan Neville and Robert Gordon — Best of Enemies is a behind-the-scenes account of the explosive 1968 televised debates between the liberal Gore Vidal and the conservative William F. Buckley Jr., and their rancorous disagreements about politics, God, and sex.

“City of Gold” (USA) Directed by Laura Gabbert — Pulitzer Prize-winning critic Jonathan Gold casts his light upon a vibrant and growing cultural movement in which he plays the dual roles of high-low priest and culinary geographer of his beloved Los Angeles.

“How to Dance in Ohio” (USA) Directed by Alexandra Shiva — In Columbus, Ohio, a group of teenagers and young adults on the autism spectrum prepare for an iconic American rite of passage — a Spring Formal. They spend 12 weeks practicing their social skills in preparation for the dance at a local nightclub.

“Larry Kramer in Love and Anger” (USA) Directed by Jean Carlomusto — Author, activist, Yalie and playwright Larry Kramer is one of the most important and controversial figures in contemporary gay America, a political firebrand who gave voice to the outrage and grief that inspired gay men and lesbians to fight for their lives. At 78, this complicated man still commands our attention.

The World Documentary Competition will include:

“Censored Voices” (Israel, Germany) Directed by Mor Loushy — One week after the 1967 Six-Day War, renowned author Amos Oz and editor Avraham Shapira recorded intimate conversations with soldiers returning from the battlefield. The Israeli army censored the recordings, allowing only a fragment of the conversations to be published. Censored Voices reveals these recordings for the first time. World Premiere.

“The Chinese Mayor” (China) Directed by Hao Zhou — Mayor Geng Yanbo is determined to transform the coal-mining center of Datong, in China ‘s Shanxi province, into a tourism haven showcasing clean energy. In order toachieve that, however, he has to relocate 500,000 residences to make way for the restoration of the ancient city. World Premiere.

“Don Verdean” (Director: Jared Hess, Screenwriters: Jared Hess, Jerusha Hess) — Biblical archaeologist Don Verdean is hired by a local church pastor to find faith-promoting relics in the Holy Land. But after a fruitless expedition he is forced to get creative in this comedy of faith and fraud. Cast: Sam Rockwell, Jemaine Clement, Amy Ryan, Danny McBride, Leslie Bibb, Will Forte.

And what is Sundance without dark sex films…

“Seoul Searching” (U.S.-South Korea) (Director and screenwriter: Benson Lee) — A comedy set in the ’80s about a group of foreign-born Korean teenagers who meet at a Seoul summer camp to learn what it means to be Korean. The three boys, from the U.S., Mexico, and Germany, then meet three girls who rock their world. Cast: Justin Chon, Jessika Van, In-pyo Cha, Teo Yoo, Esteban Ahn, Byul Kang.

“Sleeping With Other People” (Director and screenwriter: Leslye Headland) — Jake and Lainey impulsively lose their virginity to each other in college. When their paths cross twelve years later in New York City, they realize they both have become serial cheaters. Bonding over their chronic infidelity, they form a platonic friendship to support each other in their quests for healthy romantic relationships. Cast: Jason Sudeikis, Alison Brie, Adam Scott, Amanda Peet, Jason Mantzoukas, Natasha Lyonne.

“Zipper” (Director: Mora Stephens, Screenwriters: Mora Stephens, Joel Viertel) — Sam Ellis is a man on the rise — a hot-shot federal prosecutor on the cusp of a bright political future. But what was meant to be a one-time experience with an escort turns into a growing addiction — a new demon threatening to destroy his life, family, and career. Cast: Patrick Wilson, Lena Headey, Richar Dreyfuss, Ray Winstone, John Cho, Dianna Agron.