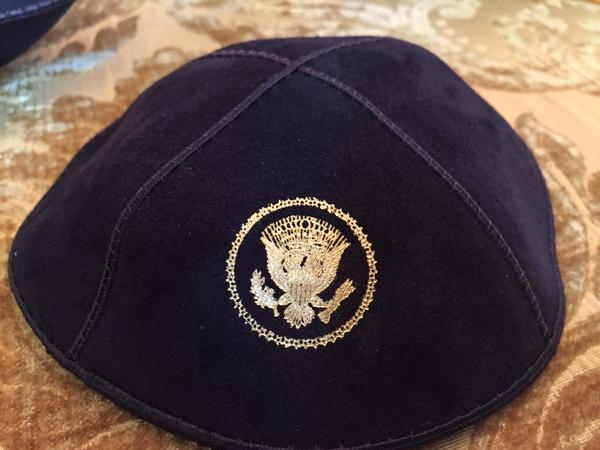 But rabbi… the true meaning of Hanukkah is to fight Greek-Assyrian culture and materialism, and to embrace national liberation, spirit, and religious freedom.

Today, Alan Gross, 65, an employee of the U.S. AID who was working with Cuban Jewish groups (or so he said), was released from a Cuban prison after five years of detention of false charges of being a spy (while not a spy per se, he was installing electronics equipment). Several U.S. senators, including Senator Pat Leahy (D-VT) and Jeff Flake (R-AZ), joined Gross and his wife on the flight from Havana to the U.S.

As word of Gross’s release and return spread, along with news of the Obama Administration’s new Cuba Policy, President Obama addressed more than 550 guests at the White House Hanukkah Party.

Obama called Gross “a man of deep faith” who “DEDICATED his life to others.” (NOte the play on the word dedication). The President joked that Gross was “willing to interrupt his corned beef sandwich” to accept a phone call from Obama during the flight home. He added, “He’s back where he belongs, in America with his family, home for Hanukkah. I can’t think of a better way to mark this holiday, with its message that freedom is possible, than with the historic changes that I announced today in our Cuba policy.”

Gross’s sister in law was present for the party**.

A clip from the 4:15 PM early party is: HERE. (where he discusses act of Pidyon Shvuyim)

The Hanukkiahs were imported from Israel, and the one that was kindled first was from the Max Rayne Hand in Hand Hebrew-Arabic School (the school that was attacked by arson recently; the alleged arsonists were arrested in Israel this week). The lighting was led by Enbar and Moran from the school, and Rabbi Bradley Shavit “Brad” Artson of the Ziegler School of Rabbinic Studies at the American Jewish University in Los Angeles.

A clip from the evening party is below (featuring outgoing ADL President Abe Foxman; DNC Chair Congresswoman Debbie Wasserman-Schultz; new ADL rez Jonathan Greenblatt; a funny ringtone that interrupts the President TWICE; a student from Yemin Orde, and a delegation from the Embassy of the State of Israel). Doctor Adam Levine (the Ebola doctor, not the musician) helped kindle the menorah/hanukkiah with Rabbi Angela Buchdahl, of Manhattan’s Central Synagogue (one of the few Korean American rabbis in the USA).

** The Hanukkah surprise (Gross’s release from Cuba) was orchestrated by The White House and Susan Rice. The Pentagon was kept in the dark, which is an example of why Hagel is leaving his DoD position. A group of military jets at Andrews Joint Air Base were assembled at the 89th Airlift Wing and flown to Cuba’s secondary airport in Havana (one to pick up gross, one to make a delivery of Cuban exchange prisoners). On board were Attorney Scott Gilbert (Gross’s attorney from Gilbert LLP); Judy Gross (Alan Gross’s wife); U.S. Senators Jeff Flake (R-AZ) and Pat Leahy (D-VT), U.S. Congressman Chris Van Hollen (D-MD) and an Obama administration national security official. Gross has volunteered to help to elect Van Hollen several years ago, going door to door in his Maryland neighborhood to get voter support. The flight left at 5 AM and arrived – making good time – at 8 AM in Havana (no macadamia nuts were served). Surprise! Alan Gross – looking frail – was already at the airport (as was Cuba’s Foreign Minister, Bruno Eduardo Rodríguez Parrilla). Gross boarded the jet and by 8:45 AM, the jet was in international airspace, and Gross was treated to potato latkes, apple sauce, popcorn, and a corned beef on rye sandwich. A call was placed to his daughter in Israel, and to his other daughter in Oregon. By Noon, several elected officials were at Andrews to gret him: U.S. Senators Dick Durbin; Barbara Mikulski, Ben Cardin, and Carl Levin, as well as Congressman Jim McGovern. Then Secretary of State John Kerry flew in to greet Gross, just in time to watch President Obama on television as he delivered a policy statement on Cuba.

Later, at a news conference, Alan Gross said, “Jag Sameaj. What a blessing to be a citizen of the United States of America. Thank you President Obama for everything you have done today.” he thanked his wife and attorney as well as the Jewish community, specifically, Ron Halber and his staff at the JCRC: Jewish Community Relations Council, as well as all of the executive directors, staff and volunteers of participating JCRCs, federations, synagogues, schools, and other Jewish, Christian and Muslim organizations nationwide. he added, “It was crucial to my survival knowing that I was not forgotten. Your prayers and actions have been comforting, reassuring, and sustaining.”