Walgreens Giftwrap: Much Taboo About Not Much? 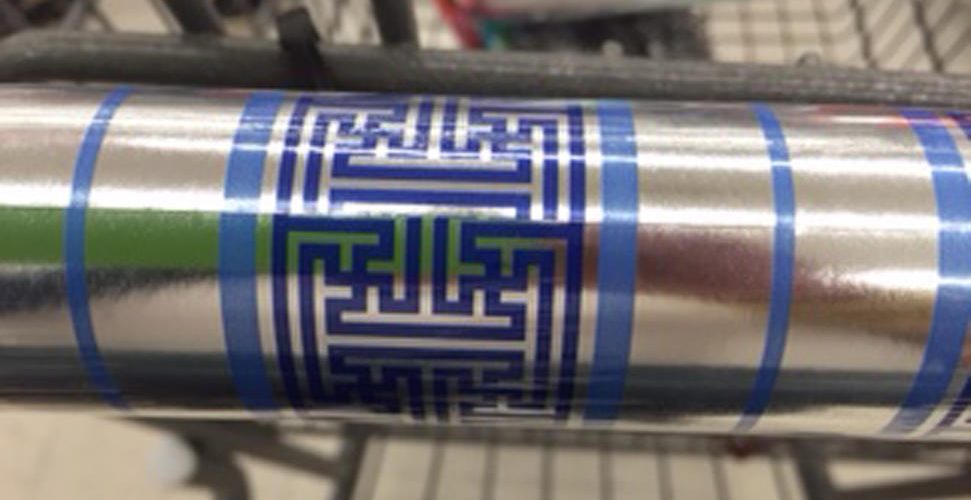 Shudders. A Jewish shopper in a Walgreen’s was apoplectic when she saw what perhaps can be seen as a swastika in the Hanukkah gift wrapping paper on Saturday. She tried to contact her rabbi for his opinion, but it was 4 PM and still Shabbos, so she knew he would not answer her call.

Instead, the California resident of called over the assistant manager, and then the manager and complained about the design. The offending wrap was removed from the store immediately, and then within 24 hours, it was removed nationally from the Walgreen’s chain, and an investigation commenced. Walgreens issued an apology.

The offense occurred in Northridge California. Cheryl Shapiro, formerly an interior designer, was shopping the Hallmark wrapping paper design in silver and blue. “What the hell was that (the alleged swastika design) doing on there?,” she told her ABC News affiliate. “I said, ‘I want it out of the store, but I wanted this to go national. I want this out of the stores nationally,'” Shapiro told ABC News.

Is this much ado about nothing? Was the design intentional? Was it a swastika or just several parallel and perpendicular lines converging? In an unscientific poll of 9,800, seventy-five percent of respondents thought the design was just an inadvertent unintentional flaw. Shapiro, however, has a hard time believing the design was inadvertent. The company could have chosen any other design for its Hanukkah wrapping paper, she said.

UPDATE: Hallmark sent the following note:
It has been brought to our attention that a holiday gift-wrap pattern has an unintentional offensive background image. As soon as we were made aware of the situation, we began taking steps to remove the gift wrap from all store shelves and we will ensure the pattern is not used on any product formats going forward. We sincerely apologize for this oversight and for any unintended offense.

I can confirm the wrap was designed by our internal creative staff in Kansas City. It was created for our holiday line; store associates in the Walgreen’s store where the consumer first noticed the wrap had placed the wrap in the Hanukkah section of their store because of the silver/blue color palette. The original design, dating back to the mid-19th century, has been in Hallmark’s archives for some time and was used as an inspiration for the design in this year’s collection.