Did a Minyan Ruin the NYC Blizzard? 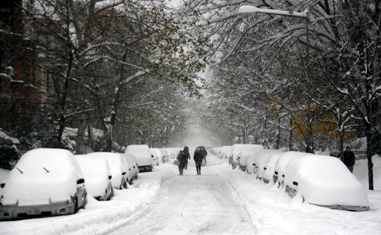 The century old NYC subway, which was built to withstand a blizzard, was closed down on Monday night by the governor of New York. Non-Emergency vehicles were banned from New York roads in several counties by the governor and the mayor of New York City. Both awaited a blizzard of historic proportions. The U.S. Senator from New Jersey, Cory Booker, a student of Hillel and the RaMBaM, and BFF of Rabbi Shmuley Boteach tweeted, “Better to be prepared for an emergency and not have one than have an emergency and not be prepared.”

The Lincoln and Holland Tunnels and the George Washington Bridge closed on Monday night, and a travel ban was arranged in New Jersey.

But alas, the center of Manhattan received only six inches of snow and not the more the 24 inches that were anticipated. Where was the National Weather Service’s historic 30 inches, or in one forecast, more than three feet of snow?

Were the elected leaders, weather supercomputers, weather radars, and television meteorologists all wrong?

Or can it be that a small morning minyan located in a secret location in Manhattan’s midtown Garment Center caused the blizzard and nor’easter to change course and dump on Long Island and Boston instead of NYC?

According to my anonymous source, a mixed minyan of mischievous adults added a prayer on Monday that beseeched three angels as well as the Lord to lessen the storm’s impact and redirect itself. The impetus for the prayer may have been to stop an elderly minyan member from trying to shovel the anticipated blizzard’s snowfall the next day – a compulsive task that would have most likely led to his fatal injury.

Maybe prayers can be powerful?

NOTE: Although the mayor, governor and NOAA’s National Weather Service called for two to three feet of snow, The Weather Channel, by Monday evening, forecast only eight to twelve inches of snow. The Weather Channel, which is led by David Kenney, and owned by NBCUniversal, Bain Capital LLC (not to be confused with Orit Gadiesh’s Bain & Company), and Stephen A. Schwarzman’s Blackstone Group, has no known relationship to the minyan participants.