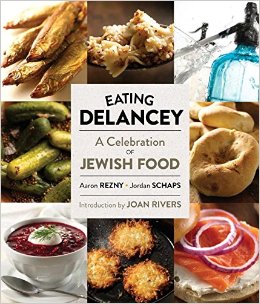 This is not really a cookbook.

The recipes are few, and their instructions are very general. For example, a recipe for grilled sweetbreads says to grill some sweetbreads and ad lemon to them

EATING DELANCEY is a CELEBRATION of the Jewish foods that gained fame around Delancey Street on Manhattan’s Lower East Side. The book is a joy to possess and to read. It is filled with memories of foods and growing up in the early and mid-20th Century. I would suggest that anyone who buys this book should add pages of their own memories and those of their family members to it.

For example, I will add how I had a birthday party at Ratner’s as well as a family reunion there many years ago before it closed; or how they had great onion rolls (you can now get them at Peck’s in Brooklyn), how I once hated the counterman at Katz’s Deli; or drank tea in a glass with a sugar cube at the Garden restaurant on East Broadway, or was it the Grand Dairy on Grand (all are now gone). Only Russ 7 Daughters and Economy Candy are still on my list of places to visit and buy.

There is a page for “Delancey on Screen.”

In the Introduction by the late Joan Rivers, she shares her love of Jewish food, which was bought on the Lower East Side by her family, since they were not a family of cooks. She loved Yonah Schimmel’s knishes on Houston Street. Her daughter and grandson just don’t understand her love of noodle kugel and gefilte fish.

Fyvush Finkel – the raconteur and singer – tells his story of cooking for his family when his wife worked. He shares his memories of pushcarts, the Cafe Royal, and the Second Avenue Deli.

Eating Delancey recaptures forever the Jewish cuisine of the Lower East Side.

Here the authors spend over an hour talking about their book: