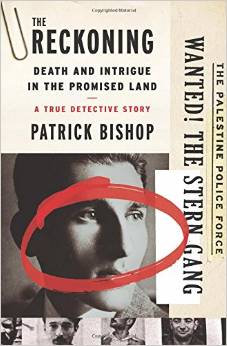 I told someone that I was reading The Reckoning, about self-righteous and ruthless people. “Isn’t that Mike Huckabee’s new polemic,” they asked. “No,” I replied, “that one is titled God, Guns, Grits, and Gravy. I am reading a little of that, but after every few pages, I feel like vomiting up grits and using a gun. The Reckoning is the story of British policeman trying to capture a top terrorist in pre-state Israel in 1942, and the after effects of the hunt.

THE RECKONING
DEATH AND INTRIGUE IN
THE PROMISED LAND –
A True Detective Story
By Patrick Bishop
(Harper, 299 pp)

In THE RECKONING, Patrick Bishop, one of Britain’s most celebrated military historians, investigates the UK’s manhunt for the Avraham Stern, the leader of the Lehi, the Stern Gang… and Stern’s death (or execution).

Bishop is on a quest for the truth.

During WWII, over 30,000 Jewish residents of the British Mandate in Palestine joined with the UK to fight the Nazis. The gangs that were fighting the British in order to form a Jewish state postponed their fights in order to focus on the common enemy of Hitler and fascism. Except for the Stern game. Stern kept up his group’s attacks, and the British kept up their hunt for him, even offering a reward for his capture. Assistant Superintendent Geoffrey Morton, a British colonial policeman was assigned to capture (or liquidate) him.

Bishop takes us back over 75 years to the formation of the gang and its series of successful terror attacks. Both Stern (nom de guerre, Yair) and Morton are depicted as dedicated leaders with high ambitions. Morton had lost several friends to bombings that Stern engineered. And Stern lost friends to the Palestine Police Force. The book reads like an action adventure, except the scenes are true. In February 1942, the British began shooting Stern’s men on sight. With British defeats by Hitler, Vichy, and Rommel in the Middle East increasing, they did not have the patience to deal with Jewish terrorists.

In less than 3 weeks, the British killed Stern and three others and arrested about 85 suspected members of the Lehi (most likely with the help of their Jewish enemies). Stern was killed on February 12, when, cornered he was cornered in an attic in his slippers by the police, Morton was called. he rushed over to complete the capture but ended up shooting and killing Stern. Maybe Stern was trying to escape out the window? Or maybe Morton. knowing that a conviction would not be easy, and the Mandate leaders would probably appease powerful interests and not executed Stern, merely murdered him in the attic.

Unfortunately for the British, Stern – in death – became a powerful romantic icon. His role was taken over by a Polish law student named Yitzhak Yezernitzky (later renamed Yitzhak Shamir). While many condemned Stern as a menace for trying to deal with the Axis powers to help defeat the British, by the end of WWII, many revered him for trying to stop Britain from banning refugees fleeing Europe.