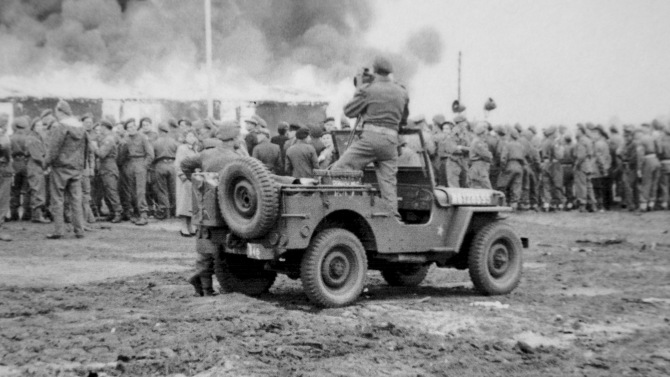 Seventy years ago, January 27, 1945, American, Soviet, and British forces liberated Nazi Death camps, including the most notorious Auschwitz. The liberations of Dachau, Bergen-Belsen and other concentration camps were recorded by each army’s newsreel cameramen. Three months after the liberation of Auschwitz, much of the newsreel footage – with Alfred Hitchcock as a supervising director – was supposed to be screened in the defeated cities of Germany. The film was titled “German Concentration Camps Factual Survey.” It never was shown in Germany. By June of 1945, priorities had shifted in London. The allies needed to reconstruct and not demoralize Germany, and the film could hurt Britain’s efforts to ban Jewish refugees from Palestine.

“Night Will Fall” – directed by André Singer – chronicles the making of “German Concentration Camps Factual Survey.” The actual 1945 documentary will be screened at the Museum of Tolerance in Los Angeles, today. Narrated by Helena Bonham Carter, “Night Will Fall” features restored raw footage as well as discussions with the soldiers who liberated the camp, the surviving men who recorded the footage, and Holocaust survivors including Mania Salinger, 90, who survived five camps (she actually married one of her liberators, a Jewish soldier)

Night Will Fall is based on the rough cuts of five of the six planned reels of the film, as well as 100 compilation reels of unedited footage, a script for voice-over commentary, and a detailed shot list for the completed film. Most holocaust documentaries over the past seven decades made use of some of this footage. The reels are housed in London’s Imperial War Museum, and the film is produced by Sally Angel, an past employee of the Imperial War Museum. You may recall that the rough cuts were screened in Berlin in the Winter of 1984, but they have since been digitized and restored.

As The New York Times wrote, “And most harrowingly, [the film] incorporates about 12 minutes of the restored “Factual Survey.” Belying its bland, clinical title, the original film, in these excerpts, is a measured but unflinching account, with brutally explicit footage of naked, emaciated corpses lying in stacks, littering fields and being thrown and shoveled into mass graves. Nearly as hard to bear are the scenes (backed by a pointed narration, newly recorded by the actor Jasper Britton) of warehoused eyeglasses, teeth and bales of human hair.”

In a related story, The New York Times LENS BLOG shared a ohoto essay and slide show today that records the lives of some of the remaining Jews of Oradea, Romania. Seventy years ago today, Soviet troops liberated Auschwitz, where one million Jews were murdered during the Shaoah. Nearly all of the 30,000 Jews from Oradea, in modern-day Romania, were imprisoned at Auschwitz. About 2,700 survivors chose to return to Oradea. The photos records the lives of Oradea’s Jews over the two years that Daniel Owen, a photographer, spent with them, beginning in February 2013.